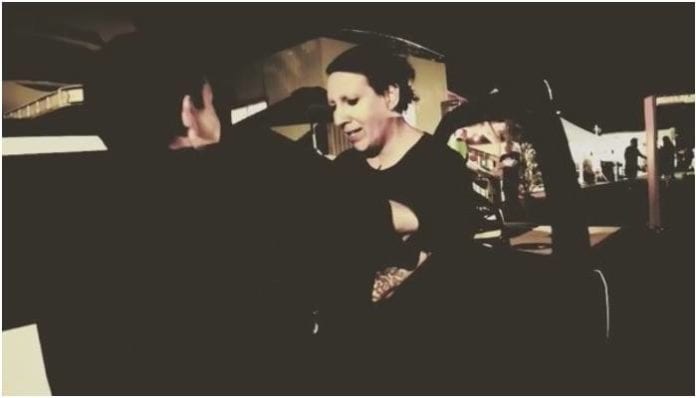 It looks like Marilyn Manson has had an eventful time during his tour with Rob Zombie.

Last week, we reported that due to an “unforeseen illness,” Manson was forced to cancel his show on Thursday (July 26.)

After the unexpected cancellation, tourmate Rob Zombie seemingly attempted to make up for the shock rocker’s absence with an extended set, including a surprise cover of Manson’s version of Eurythmics’ “Sweet Dreams (Are Made of This).”

Fast forward to yesterday, Manson posted a new set of Instagram posts that showcased more of his bad luck (or, more accurately, his sense of humor.)

The first clip that Manson shared was a distorted video of himself, where he can be seen smoking. Accompanying the short video, the singer then added the caption “I don’t like the drugs…”

Shortly after posting the first video, Manson then shared a silent clip of him getting “arrested” by a police officer during the Bangor, Maine date of his tour with Zombie.

Fear not, it appears as though the clips were all part of a fun prank pulled by Manson and the police department.

After posting the video, the Bangor police department also showcased their sense of humor by posting a statement on Manson’s “arrest,” where they discussed the events of what happened. You can check it out below.

“In the interest of saving us a whole lot of call-backs, Marilyn Manson was merely handcuffed and released immediately thereafter.

Officer Curtis Grenier, typically listening to only Enya, and a little bit of Oasis was posted backstage during the Impact Music Festival. He did not recognize Mr. Manson without his stage makeup- our apologies.

Later, when approaching Rob Zombie, Officer Grenier was overheard saying, “I have never seen him in the Walking Dead, so I don’t know what the big deal is.”

Grenier has been spoken to and relieved of back-stage concert related duties for the foreseeable future. The Chief has determined that Grenier can work backstage during Lord of the Dance or anything related to Disney.

Keep your hands to yourself, leave other people’s things alone, and be kind to one another.

We will be here.

With the Beautiful People.

Marilyn Manson is currently finishing up the “TWINS OF EVIL: The Second Coming” tour with Rob Zombie. Manson will also be doing a series of headlining shows.

Check out the full list of Manson’s tour dates below!