Coming off their biggest hometown show to date, Beartooth have released a micro-documentary discussing the early years of living on $5 a day to their feelings leading up to an incredible performance at Sonic Temple Festival.

Read more: A Day To Remember to drop Marshmello collab as first new music in 3 years

Beartooth took to Twitter to unveil the documentary, a beautifully crafted visual masterpiece directed by JAR.

While the micro-documentary clocks in at 3 minutes and 35 seconds, it still packs in everything from the band’s early days of touring in a van to their feelings leading up to their biggest hometown performance to date.

“I honestly think Sonic Temple is going to be the best show just, period, that Beartooth has ever played,” frontman Caleb Shomo says in the video.

From performance to studio footage, this video leaves us eager for a full Beartooth documentary.

We sit down to discuss our thoughts and feelings going into our biggest homecoming show yet. @SonicTempleFest micro-documentary out now.

You can check out the full Sonic Temple micro-documentary below!

The band are getting ready to kick off their Australian tour in the coming months while also making appearances at some festivals this summer and fall.

You can check out Beartooth’s live festival appearances at the cities and dates listed below!

Did you catch Beartooth’s iconic set in Columbus? Sound off in the comments below! 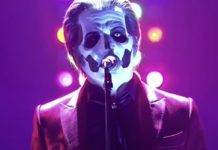