Bhad Bhabie throws drink on Iggy Azalea, gets held back by security

It seems as if every day brings a new beef in the music world, and the latest to pop up is Bhad Bhabie vs. Iggy Azalea.

Both rappers were at Cardi B’s FashionNova event at Boulevard3 in Hollywood Wednesday when Bhabie hurled a drink in Azalea’s direction.

In the video, you can see Bhabie, 15, launch a cup of clear liquid, missing Azalea, 28, but still getting her drenched in the process. Immediately following, a team behind Bhabie begin holding her back, which TMZ states was her own security.

Bhad Bhabie: “don’t come up to me acting like my friend”
Bhad Bhabie: pic.twitter.com/HOYTcn2VfE

After the incident, Azalea took to her Instagram Story to vent about what happened from inside the event. She also spoke to her fans while driving home, explaining why she walked away from the situation.

“I get that this little girl has made a name for herself acting a damn fool on television and online, but I’m a grownup,” she says. “I’m not about to waste my energy on that shit or be fighting a kid in a club.”

Azalea is referring to the fact Bhabie (aka Danielle Bregoli) began her rise to recognition after appearing on a 2016 episode of Dr. Phil. On the show, she stated things such as “Cash me outside, howbow dah?” which in turn went viral. Last year, she inked a deal with Atlantic and began releasing more music as Bhad Bhabie.

Azalea continued her Story by stating she believes Bhabie was in it for the attention.

“I just think people want clout really bad,” she explains. “Mama, good luck with your career. You’re young. You’re going to look back on this and you’re gonna really feel dumb. I don’t know. I just think that shit’s lame as hell but maybe it’s because I’m a grownup.”

This isn’t the first time Bhabie took aim at Azalea, as she remixed her track “Hi Bich” to include a diss back in February.

“Bitch don’t compare me to Iggy, that old ho is washed and I’m lit/Wouldn’t pay her to wash up my whip (bye, broke bitch, bye, ho!)”

Bhabie then took to her own Instagram Story to quote her lyrics, stating “bye broke bich, bye hoe.” She also claims there’s no beef because she was “just told it’s not smart to beef with no one that hasn’t had a career since 2014” before offering her a signed poster. 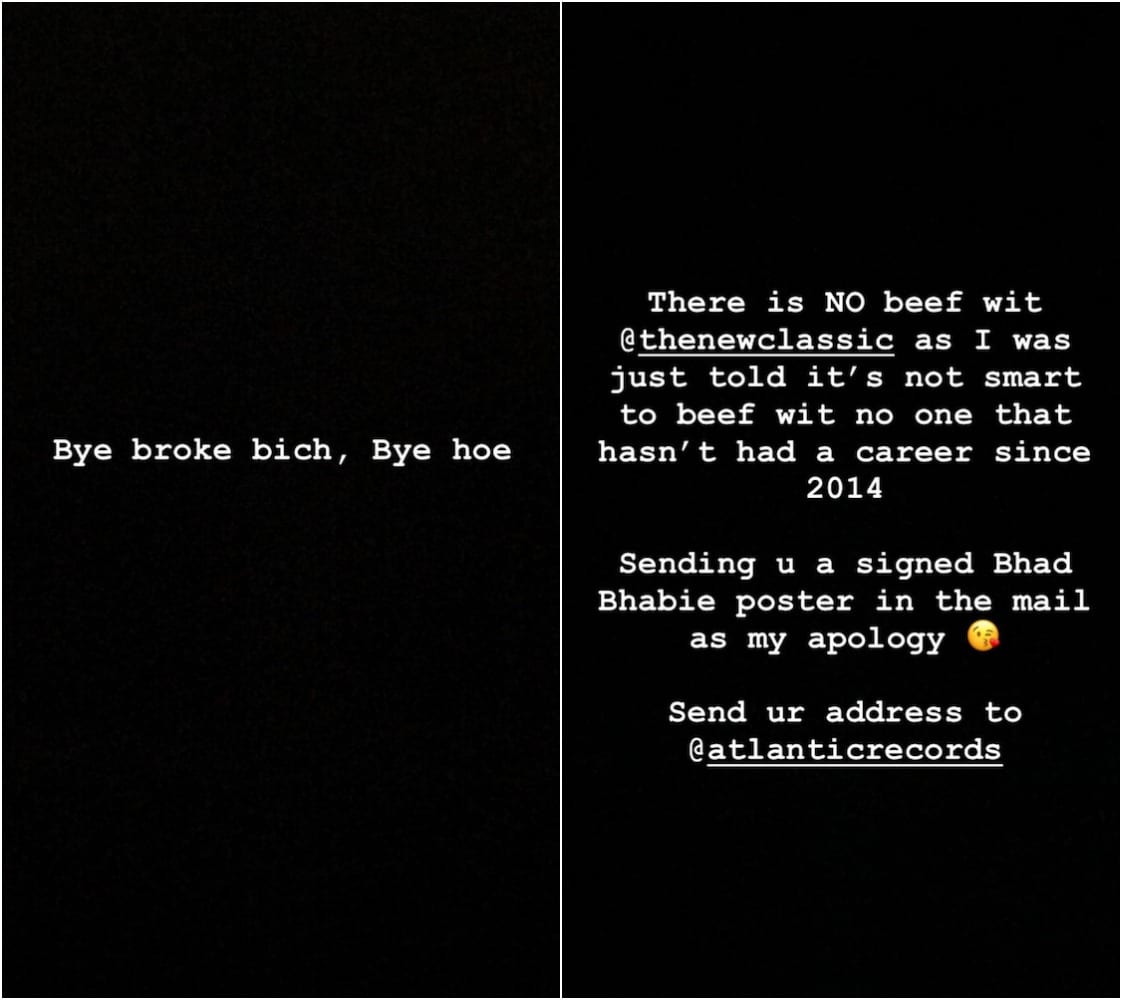 Azalea wasn’t done, however, taking to Twitter with the best possible response in a since deleted post to ask, “I just wanna know if sis is grounded now or – ?”

However, she did leave a round of tweets echoing the same sentiments as her Story and mentioning she’s more successful than Bhabie thinks.

Imagine me scrambling around on the floor in a dirty night club trying to hit a teenage girl.
Girl. NO.
I’m grown and will simply have you REMOVED and continue enjoying myself.
???? #YouNotSpecial
Anything else from her mouth is ignored –
it’s too preschool for me.

Anyway I’ll let y’all know about the 2.7 million dollar distribution deal i came back to LA to sign later this week. I have big girl things to do –
Gotta go!

What do you think of Azalea and Bhabie’s beef? Sound off in the comments!