Nearly two weeks have passed since Black Veil Brides shared the news they were parting ways with bassist Ashley Purdy.

Today, Purdy broke his silence on Twitter by announcing he has new music in the works. Check out the clip below.

What if i told you i’ve been busy.. working on new music 🎶

On Nov. 15, BVB announced Purdy’s departure after 10 years with the band. The news came days after BVB revealed a 2020 tour supporting In This Moment.

While the announcement didn’t get revealed until Nov. 15, Purdy began listing several limited BVB items on his Depop as recently as 22 hours ago prior to it. Stage outfits and rare versions of the band’s albums are among the available items listed earlier that week. 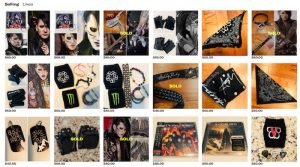 Purdy has still not released an official statement of his own, but this post will be updated should one be provided.

Black Veil Brides released their most recent album Vale in 2018, playing the final cross-country Warped Tour and then Aftershock Festival in October of that year. With no new music or shows since then, the band offered an update on their status in April of this year. While chatting about his sophomore solo album and graphic novel of the same name, The Ghost Of Ohio, frontman Andy Biersack revealed the future is open-ended.

With previously announced plans to reimagine their debut album, We Stitch These Wounds, for its 10-year anniversary, the band confirmed new music would also appear on the album, which was one of the most recent updates ahead of this tour.

BVB hits the road with In This Moment, DED and Raven Black for a spring tour. It’s unclear at this time who will be playing bass. Tickets are on sale now here with dates below.