Black Veil Brides to support In This Moment on 2020 tour

In This Moment have had a busy 2019 full of epic runs, and they’re announcing their first for 2020. The band is bringing along Black Veil Brides, DED and Raven Black for a spring tour.

The In Between tour kicks off March 24 at the Orlando House of Blues and wraps up May 17 in Morrison, Colorado at the iconic Red Rocks Amphitheatre.

In This Moment released their latest album Ritual in 2017 and are currently working on a followup. The band have plans to release new music in early 2020 with a full-length to follow in the spring.

As for Black Veil Brides, the band released Vale in 2018, playing their most recent shows at the final cross-country Warped Tour and then Aftershock Festival in October of that year. The band offered an update on their status in April of this year.

While chatting about his sophomore solo album and graphic novel of the same name, The Ghost Of Ohio, frontman Andy Biersack revealed the future is open-ended.

Read more: Top 10 bands who deserve their own music biopic adaptation including Black Veil Brides, My Chemical Romance and more

“I don’t know what’s gonna happen next, and that’s what’s so exciting,” Biersack explained. “For the longest time, there was a trajectory where I had set up this story with The Wretched And Divine then we did the more hard-rock oriented record with Bob Rock, then we re-entered the Wretched And Divine story and there were pre-determined elements to what the band was gonna be. This is the first time in years where I don’t know what’s going to come next.

“I don’t know what the next chapter is, and I don’t know how the other guys are feeling about different things,” Biersack continues. “We’ve got an opportunity now to kind of do what we’re doing, and each of us are focusing on different projects, and we’ll regroup and see where it goes.”

With previously announced plans to reimagine their debut album, We Stitch These Wounds, for its 10-year anniversary, the band confirmed new music would also appear on the album. Fingers crossed we get that new music soon.

In addition to this tour, BVB will also be heading to the U.K. in June for Download Festival with more information here.

Tickets for the upcoming U.S. tour go on sale this Friday, Nov. 15 at 10 a.m. local time. Check out the full list of dates below with tickets here. 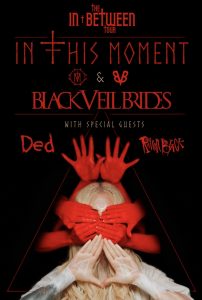