We’ve all been singing this blink-182 lyric wrong our entire lives, and our minds are officially blown.

Mark Hoppus took full advantage of one of the latest memes to hit the internet, sparked by the common phrase “due to personal reasons.” However, in the process, he explained how we’ve all been singing “What’s My Age Again?” incorrectly.

Yesterday, Hoppus first tweeted, “Due to personal reasons I will be wearing cologne to get the feeling right.”

Due to personal reasons I will be wearing cologne to get the feeling right.

People immediately started responding to the tweet. Many explained that, first of all, it’s not the correct day of the week for him to be quoting the 1999 track.

But it’s not even Friday night

You’re tweeting this on a Sunday. You’ve changed Mark

Others then started revealing that they never knew it was “I wore cologne/To get the feeling right.”

STOP WHY DID I THINK IT WAS “I WALK ALONG”

When I first heard what's my age again, way back, I genuinely thought mark sang "I walk alone, to get the feeling right".

While others had some pretty spot-on jokes.

No no no …”you walked alone to get the feeling right”. How can you forget your own lyrics, man?!

Hoppus then followed up his original tweet with further explanation:

“Science fact: if you thought the lyrics were “I WALK ALONE to get the feeling right,” you are a Fake Fan™️.”

Science fact: if you thought the lyrics were “I WALK ALONE to get the feeling right,” you are a Fake Fan™️. 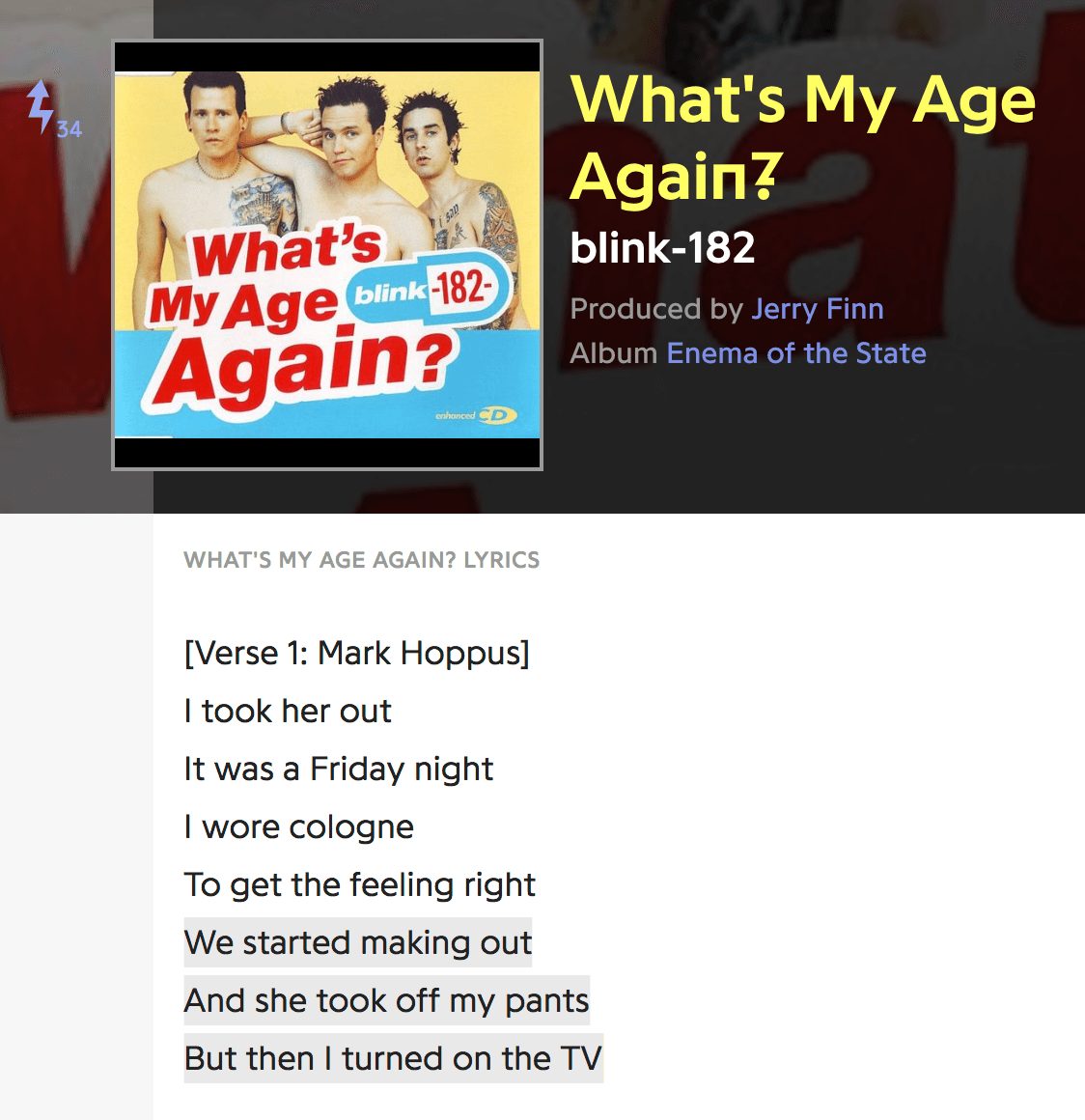 Give the track another spin, and let us know what you hear in the comments below.

This isn’t the first time something blink-related has come into question including how to say their name.

While we always figured a simple “blink one-eighty-two” was correct, it seems those across the pond often pronounce the act’s digits as “one-eight-two.” But, wait, that’s not the end of this pickle! Because television’s James Corden is dropping in with his own baffling blink band name verbalization.

Indeed, the late-night talk show host has stopped singing in a car long enough to give us his perplexing take on how to properly articulate the band’s name. “They should technically be called Blink one hundred and eight two,” offers Corden on Twitter.

Don’t start this. I admit we are wrong on this. America calls them Blink One eighty two. Which is also wrong. They technically should be called Blink one hundred and eighty two. Don’t take some moral high ground here. https://t.co/zm2Gpb6xtT

“Don’t start this,” proposes the TV host. “I admit we are wrong on this. America calls them Blink One eighty two. Which is also wrong. They technically should be called Blink one hundred and eighty two. Don’t take some moral high ground here.”

And the Late Late Show With James Corden namesake’s surely tongue-in-cheek diction lesson comes on the heels of another entertainer’s blink-182 elocution announcement: ComedianIan Karmel kicked off the riff that Corden picked up on.

Of course, blink fans may remember the group only appended their epithet with a number when an Irish band called “Blink” staked their claim to the name as the San Diego pop-punkers were on the come-up. But we’re sure Corden knows that.

Beyond the deliberation over pronunciation, Hoppus reminds us we’re losing sight of the most important aspect. The “B” should always be lowercase!

Former blink vocalist/guitarist Tom DeLonge also tossed in his two cents. “It’s actually— Blink eighteen-two,” DeLonge tweets. “People have all gotten this wrong for years. Sometimes this can happen with very complex, thoughtful and elevated art.” This is like “the dress” all over again.

It’s actually— Blink eighteen-two. People have all gotten this wrong for years. Sometimes this can happen with very complex, thoughtful and elevated art. https://t.co/jmsfv401KF