Canadian act Calling All Captains are back with a music video for their new song, “Undone.” The track and the accompanying visual were shot by Alan Bremner and edited by Alex Bemis.

The new song exemplifies a perfect link between pop punk and post-hardcore. The band expertly mix invigorating instrumentation with aggressive vocals to create a fresh sound.

The video follows Luc Gauthier (vocals), Brad Bremner (guitar/vocals), Connor Dawkins (guitar/vocals), Nick Malychuk (bass) and Tim Wilson (drums) as they goof off in the desert. They climb rocks and dance together with lightheartedness. The scene makes viewers want to jump up and head-bang along with the group. You can watch the visual below.

The music video for “Undone” is essentially a visual representation of Calling All Captains as they watch from the sidelines of someone else’s undoing, satisfied in the fact that they chose to take the high road in a tricky situation. They also find comfort through knowing, ”I’ll be better off/You’ll see.”

The band broke down the story behind the song in an interview with BrooklynVegan.

“‘Undone’ was written about that person in your life that makes everything about them and takes no responsibility for their own actions,” they say. “Those kind of narcissists eventually expose themselves for who they really are and end up with nothing left after everyone else catches on to their charade. Sometimes all you can do is be the bigger person and walk away from the situation. Not every hill is worth dying on. The less you fight back, the less power you give them over you. Remember to trust your gut and stand by your values and you’ll prevail through their bitterness and aggression.”

Read more: Weathers are “coming for ya” in their brand new single “Karma”—listen

“Undone” comes after the release of “Tailspin,” which was originally shared in May 2021. The cathartic song conveys a darker message, a contrast with Calling All Captains’ most recent single. Through bleak lyrics, the track delves into the pains associated with the grueling task of trying to overcome your vices. Check out the video for the song below.

The theme of constantly trying to be better yourself is also prevalent in a lot of Calling All Captains’ music. The music video for their 2019 single “Chasing Ghosts,” which was reimagined in 2020, proves this. In an interview with Alternative Press about the song, the band discussed the importance of looking to the future when trying to heal.

Read more: How punk and reggae united and went “outernational” to rule the world

“‘If you want better, then go get it.’ That’s what I tell myself literally every day,” the band says. “Strive to be better, [and] work toward bigger goals instead of chasing ghosts of a past that I put on a pedestal. Smoking and drinking as a way to cope with everything doesn’t get you anywhere. This song is a love letter to all those who are stuck in the same cycle of destructive behaviors that come with romanticizing the past.”

The early-2000s-reminiscent “Chasing Ghosts” came off of Calling All Captains debut EP, Nothing Grows Here. You can check out the rest of the 2019 EP below. 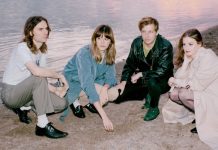