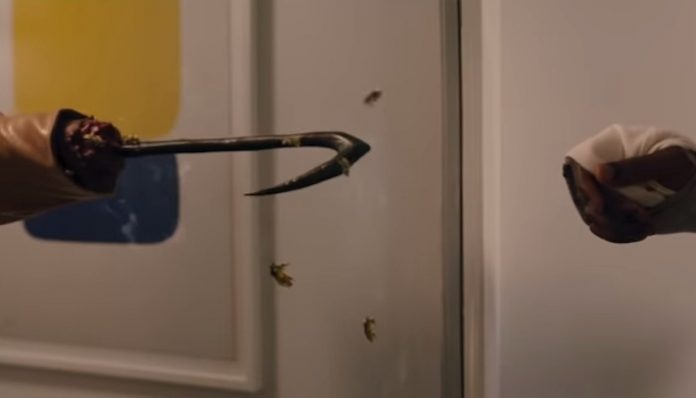 Jordan Peele has opened our eyes and chilled our veins since embracing the horror genre with the Oscar-winning Get Out and critically-acclaimed Us. Now, the genre favorite has finally offered up the first trailer for the highly-anticipated Candyman remake.

The new film follows two other franchise entries with 1995’s Candyman: Farewell To The Flesh and 1999’s Candyman: Day Of The Dead. Stepping back from directing duties this time around, Peele has signed on as writer/producer for the upcoming movie with Nia DaCosta at the helm.

Described as a spiritual sequel to the 1992 film of the same name based on Clive Barker’s short story “The Forbidden,” the 2020 installment returns to where it all began.

Yahya Abdul-Mateen II stars as visual artist Anthony McCoy who Peele fans will recognize as Russel Thomas from Us. He moves to Chicago’s Cabrini Green neighborhood with his girlfriend and gallery owner Brianna Cartwright, portrayed by Teyonah Parris (Mad Men, If Beale Street Could Talk), where a supernatural killer named Candyman has terrorized the community for years.

Summoned by saying his name five times, the titular character continues his violence-fueled streak of terror for a new generation. The new film utilized the rule of five to build anticipation for the trailer, asking fans to tweet his name to unlock a teaser.

I dare you to say his name.

Now, the new trailer is here with the creepiest take on the Destiny’s Child hit “Say My Name” (get it?) that you will ever hear. The idea of using the song in the trailer has likely been on the team’s mind for quite some time as the title was used in place of Candyman around its Chicago filming locations to help make production more discreet.

Much like Us and Luniz’s “I Got 5 On It,” this terrifying musical update will send chills down your spine. Candyman hits theaters June 12, and you can check out the full synopsis below with the new trailer.

For as long as residents can remember, the housing projects of Chicago’s Cabrini Green neighborhood were terrorized by a word-of-mouth ghost story about a supernatural killer with a hook for a hand, easily summoned by those daring to repeat his name five times into a mirror. In present day, a decade after the last of the Cabrini towers were torn down, visual artist Anthony McCoy and his girlfriend, gallery director Brianna Cartwright, move into a luxury loft condo in Cabrini, now gentrified beyond recognition and inhabited by upwardly mobile millennials.

With Anthony’s painting career on the brink of stalling, a chance encounter with a Cabrini Green old-timer (Colman Domingo) exposes Anthony to the tragically horrific nature of the true story behind Candyman. Anxious to maintain his status in the Chicago art world, Anthony begins to explore these macabre details in his studio as fresh grist for paintings, unknowingly opening a door to a complex past that unravels his own sanity and unleashes a terrifyingly viral wave of violence that puts him on a collision course with destiny.

What do you think of the first Candyman trailer? Let us know in the comments below.