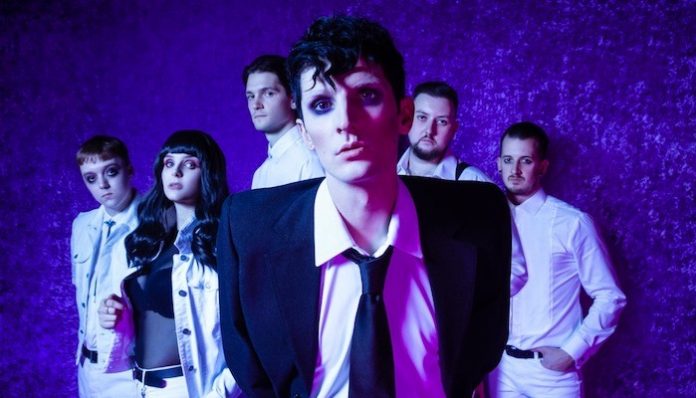 Creeper announced the release date for their upcoming album Sex, Death & The Infinite Void, along with a brief tour in the UK.

Formerly The Fugitives of Heaven, the band ushered in their new era last year with the release of “Born Cold.”

When sharing the track, the band wrote, “But the cowardly, the unbelieving, the vile, the murderers, the sexually immoral, those who practice magic arts, the idolaters and all liars – they will be consigned to the fiery lake of burning sulfur. This is the second death. This is Born Cold.”

But the cowardly, the unbelieving, the vile, the murderers, the sexually immoral, those who practice magic arts, the idolaters and all liars – they will be consigned to the fiery lake of burning sulfur. This is the second death. This is Born Cold. https://t.co/2K9BmtLK90 pic.twitter.com/S6i70n9OBH

A few weeks later, the group dropped a music video for the track. Check it out below.

Now, Creeper dropped the name and release date of their upcoming album.

The band teased fans on Twitter prior to the announcement by posting a series of periods and short video.

They then announced that Sex, Death & the Infinite Void will drop this year via Roadrunner Records.

‘Sex, Death & the Infinite Void’ will be yours on May 22nd via Roadrunner Records 🖤⚡️

Pre-order the album from our official European store by 9am on Wednesday January 15th and receive early access to tickets for our UK headline tour in April. https://t.co/zz8LJEzcr2 pic.twitter.com/MeIVKo2L2a

Speaking on the album artwork, vocalist Will Gould took inspiration from when he first found music.

Read more: 40 most anticipated albums of 2020 including Poppy, Creeper and more

“The real-life time travel that music can achieve is almost supernatural,” he says in a press release. “In a moment you can be transported from a bedroom in the south of England to another dimension entirely. With our latest album, we attempted to perform a similar magic.”

“The concept behind the artwork came to me when I was considering the ways I first discovered music. Both Ian Miles and I have similar stories of discovering our parents’ records. Holding in our hands these battered relics of the past, playing them for the first time and experiencing the magic of them coming to life over the speaker.”

In a previous interview, Gould revealed that the album is unique.

“No one will put a record out like this next year,” he states. “You won’t hear anything like it.”

Sex, Death & the Infinite Void drops May 22. Preorder for the album begins Jan. 15 and can be found here.

Along with the record’s name, Creeper also announced the God Can’t Save Us tour in the UK. They will be joined by Holding Absence and Wargasm. Pre-sale begins Jan. 16 with general starting Jan 20. Tickets will be available here, check out where they’re headed below.

Will you be picking up a copy of Creeper’s Sex, Death & the Infinite Void? Let us know in the comments below!