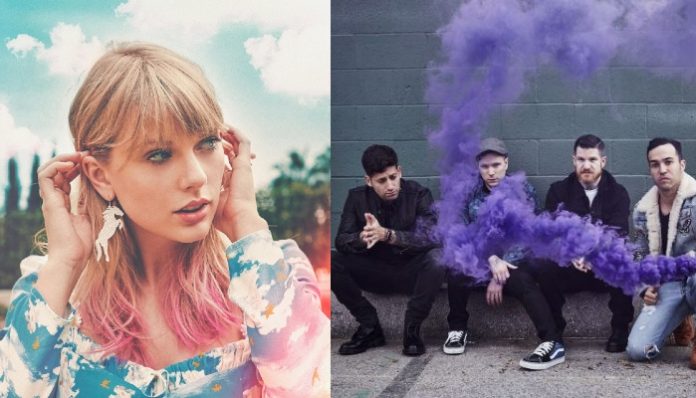 In a recent cover story with Rolling Stone, Taylor Swift told the publication that emo megastars Fall Out Boy are one of her biggest influences.

The pop superstar credited the band as massive artistic influences for her before quoting lyrics from their classic track “Sugar, We’re Goin’ Down.”

“I love Fall Out Boy so much,” Swift told with Rolling Stone. “Their songwriting really influenced me, lyrically, maybe more than anyone else. They take a phrase and they twist it. ‘Loaded God complex/ Cock it and pull it’? When I heard that, I was like, ‘I’m dreaming’.”

Taylor and Fall Out Boy’s paths have crossed before this though. Just six years ago, they all teamed up to perform together at the Victoria’s Secret Fashion Show.

Fall Out Boy and Taylor Swift performing together is the best and most iconic thing to ever happen in all of history.
Its only the truth 🤷#TaylorSwift #TheFemaleArtist #PCAspic.twitter.com/rrZR61WCtV

Swift has been on a roll lately referencing scene artists including her single, “ME!” featuring Brendon Urie.

Earlier this year, the pair beat Ariana Grande’s video for “thank u, next” for the most views on a video in 24 hours.

“ME!” collected more than 65 views on Vevo in the first day it was out and currently sits around 266 million views.

Swift celebrated beating the record by posting a snapshot for the video’s set on Instagram.

Because of you guys, this video broke the @vevo record and WE ARE NOT CALM.

In case you haven’t seen it, check out the video for “ME!” below.

What do you think of Taylor Swift singing Fall Out Boy’s praises? Let us know in the comments below.