This video is a throwback to the late 1990s.

Frank Iero is a multi-talented musician that has been involved in so many projects that it’s sometimes hard to keep up. From My Chemical Romance to LeATHERMOUTH, Death Spells, the Patience and the Future Violents, Iero has an ever-growing list of musical accomplishments.

However, it was his first band Pencey Prep that helped lay down the groundwork for Iero’s successful music career. Now, a video of the band has resurfaced and it’s so rare that not even Iero has seen it.

Iero has shared a few Pencey Prep throwbacks over the years. Back in 2018, he posted a photo of one of the band’s performances in 1999. Rocking a Lakers shirt and choker, the nostalgic photo shows the band smiling, although Iero says the gig was anything but fun.

“Playing a streetfair outside a deli/hotdog stand in NJ with the original Pencey Prep lineup. @sdotsimon is out of frame probably smoking, possibly ordering a chicken parm sandwich…Fun times, definitely not a fun gig. thank you @johnhambonemcguire ‘s friend natalie for supplying the picture that jogged a million memories.”

jeeeez this is an old one… @johnhambonemcguire just sent me this. 99 maybe? playing a streetfair outside a deli/hotdog stand in NJ with the original Pencey Prep lineup. @sdotsimon is out of frame probably smoking, possibly ordering a chicken parm sandwich. Bruno Rocha may have still been in the band at this point too, but he’s also unfortunately not in the photo and there are way too many Bruno Rochas on instagram so i can’t find him to tag him either ☹️but if you’re out there man hit me up, miss you. Fun times, definitely not a fun gig. thank you @johnhambonemcguire ‘s friend natalie for supplying the picture that jogged a million memories. xofrnk (EDIT: hambone just told me this is in front of the Midtown Grill in Clifton NJ)

Now, even more footage from the Pencey Prep era has been unveiled. Tim Hagevik recently came across an old video of the band and decided to share it on Instagram. According to Hagevik, the video was part of “promo stuff” for Pencey Prep.

Unfortunately, the video has no sound so we will never know what music might have been playing in the background. Nevertheless, the video’s editing is a true throwback to the Pencey Prep era and features some live footage of the band performing.

Old school pencey prep intro vid from the vault . Sorry but this one doesn’t have sound. It was more promo stuff . #penceyprep #nj #njmusic #njmusicscene

However, Pencey Prep fans aren’t the only ones who are seeing this old school video for the first time. It appears that this video is so rare that not even Iero has seen it. 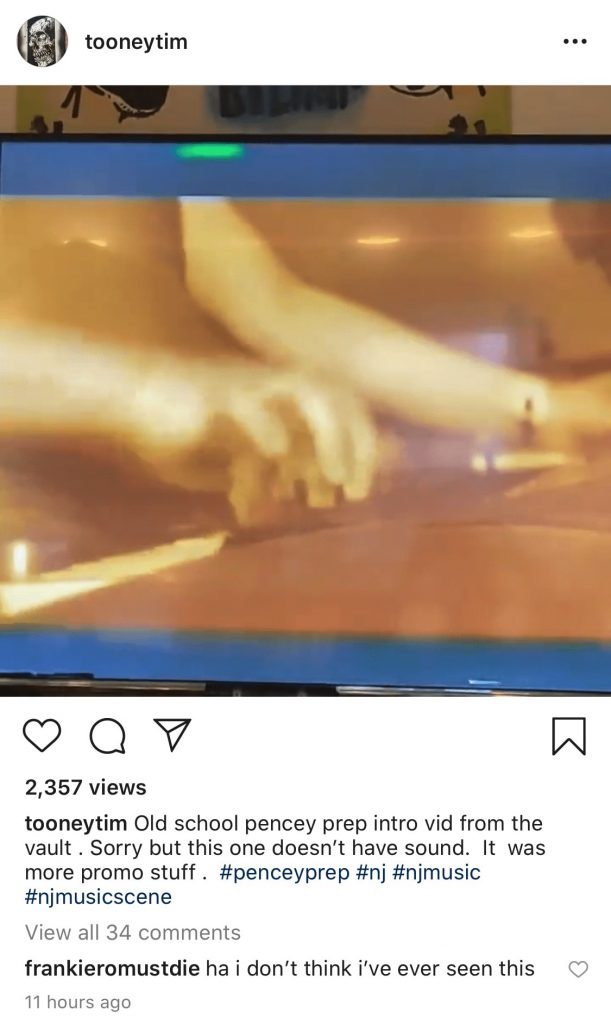 Pencey Prep formed back in the late ’90s and went on to release their debut album Heartbreak in Stereo in 2001. The LP was the first and only full-length release from Pencey Prep before they disbanded around 2002.

Following this, Iero went on to join MCR as their rhythm guitarist. My Chemical Romance’s debut album I Brought You My Bullets, You Brought Me Your Love was released that same year.

Were you a fan of Pencey Prep? Let us know in the comments below.