Greta Thunberg, a Swedish teen climate change activist that was featured in a self-titled The 1975 song, just condemned the United Nations for their lack of action to protect the environment.

The 16-year-old gave her powerful speech during the opening session the United Nations Climate Action Summit. The summit is a meeting of the UN to address the issue of climate change by increasing climate action and making plans to achieve the goals in the Paris Agreement.

Read more: K.Flay is over climate change inaction in “Not In California” video

For those who may be unaware, Thunberg is a Swedish teen who skipped school to protest outside of her country’s parliament. She has gained notoriety for all of her work within the climate change activism movement. Thunberg was also the driving-force behind Friday’s coordinated strike from school that protested government and business inaction on climate change. The strike took place in 150 countries.

Following the strike, she delivered the scathing speech to the UN on Monday.

“This is all wrong. I shouldn’t be up here. I should be back in school on the other side of the ocean, yet you all come to us young people for hope. How dare you,” she said.“People are suffering, people are dying, entire ecosystems are collapsing. We are in the beginning of a mass extinction, and all you can talk about is money and fairy tales of eternal economic growth.”

“For more than 30 years, the science has been crystal clear. How dare you continue to look away and come here saying that you’re doing enough when the politics and solutions needed are still nowhere in sight,” Thunberg continued. “You say you hear us and that you understand the urgency. But no matter how sad and angry I am, I do not want to believe that, because if you really understood the situation and still kept on failing to act, then you would be evil.”

She went on to tell the world leaders that they are “failing” humanity, but “young people are starting to understand (their) betrayal”.

The eyes of all future generations are upon you and if you choose to fail us, I say we will never forgive you,” she concluded her speech.

Thunberg gave the speech in front of several world leaders. You can see it below.

Following her speech, U.S. President Donald Trump tweeted what many people believe is a diss at Thunberg.

“She seems like a very happy young girl looking forward to a bright and wonderful future. So nice to see!” he captioned a video of her speech.

She seems like a very happy young girl looking forward to a bright and wonderful future. So nice to see! https://t.co/1tQG6QcVKO

A few hours later, Thunberg appeared to respond. She changed her Twitter bio to read “A very happy young girl looking forward to a bright and wonderful future.” You can see a screenshot of it below. 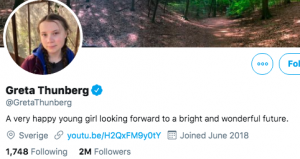 Thunberg was also seen staring down Trump when he entered the summit, which has quickly become a meme. You can see the clip the meme came from below.

As previously stated, Thunberg was featured on the first track from The 1975’s forthcoming record, Notes on a Conditional Form.

The 1975 have been outspoken about their support for climate action and saving the environment. They recently signed onto a campaign that’s fighting to create emergency climate change action. Music Declares Emergency, a music industry collective group, is leading the campaign, now gaining 2,000 signatures of support.

Additionally, the band printed over some old shirts with new logos relating to their upcoming album to take a step towards sustainability.

The shirts were originally printed with old tour dates and logos from their 2013 debut album. Now, each shirt is finding new life by being printed over with a Notes on a Conditional Form logo.

The band also revealed fans would be able to bring any of their old the 1975 shirts to Reading and Leeds and have the same printing done to them.

“OK! So here is the first drop,” Healy posted on Instagram. “We are not making new shirts for now. Unsustainable. SO, AND I’M SO FUCKING INTO THIS. This run is all old shirts (first album, early tours etc) that we had kept and have reprinted as your NOACF shirts. You will also be able to bring any old 1975 shirt or ANY bands you love shirts to Reading festival and have the same print done over the top there and then 🥾🌍 EDIT: Reprinting is FREE if you bring your own 1975 shirt at both LEEDS and READING!”

You can check out a video of the new the 1975 shirts below!

OK! So here is the first drop! We are not making new shirts for now. Unsustainable. SO, AND I’M SO FUCKING INTO THIS. This run is all old shirts (first album, early tours etc) that we had kept and have reprinted as your NOACF shirts. You will also be able to bring any old 1975 shirt or ANY bands you love shirts to Reading festival and have the same print done over the top there and then 🥾🌍 EDIT: Reprinting is FREE if you bring your own 1975 shirt at both LEEDS and READING!

What do you think of Greta Thunberg’s speech at the UN conference? Sound off in the comments down below!