The 1975 have unveiled the first track from their forthcoming record, Notes on a Conditional Form. Per the band’s tradition, the track is titled “The 1975.”

This time, however, Matty Healy is not singing.

Earlier today, fans took notice of the band deleting all of their social media, sparking anticipation for the followup to A Brief Inquiry Into Online Relationships. 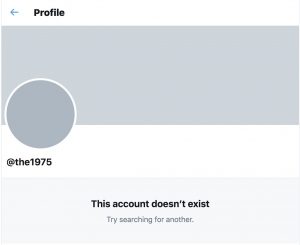 Yesterday, Dirty Hit Records tweeted a picture from something related to the band, bearing the phrase “WAKE UP!”

Some fans hit the nail right on the head, connecting the artwork to Thunberg’s speech.

what if “WAKE UP! WAKE UP! WAKE UP!” is about the current climate crisis and they’re telling us it’s an emergency and that’s why there is a quote from Greta on Spotify! the 1975 are telling the world that we need to get our shit together and save OUR PLANET pic.twitter.com/FLP0NMGouC

For those who may be unaware, Thunberg is a Swedish teen who skipped school to protest outside of her country’s parliament to raise awareness about the current climate crisis.

The band heads off on their fall tour Nov. 16. You can put in your ticket request here, and see a full list of dates below.

What do you think of the brand new track from the 1975? Sound off in the comments below!