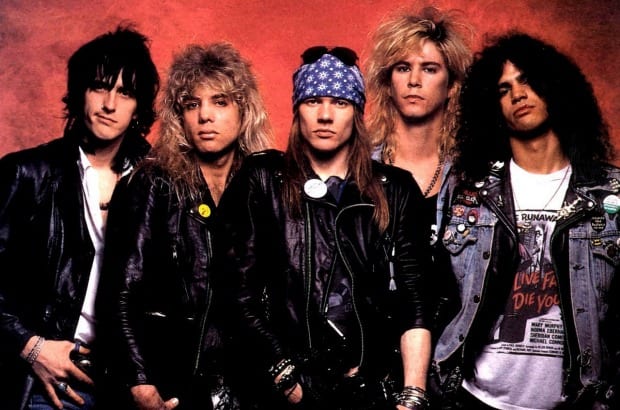 If you’re a fan of Guns N’ Roses you should know by now they aren’t to be messed with, but one superfan apparently hasn’t gotten that memo.

Rick Dunsford has allegedly been banned from ever seeing GNR live again after he was singled out as part of a series of leaks from the Chinese Democracy era.

Dunsford has seen the band live 32 times, has their autographs tattooed on his body and even named his son Axl, so there’s no doubt he’s a huge fan.

On Oct. 7, Dunsford was allegedly waiting in line for their Wichita show When he was flagged by security and told to leave the property. According to Tone Deaf, he posted of the incident on his private Facebook along with a video of the incident.

“I’ve got a lot of friends that go to various shows. When they were playing in Charlotte for the tour kickoff [Sept. 25], I got word that they were looking for me. They were asking everybody in the crowd, ‘Where’s Rick?’ And they had pictures of me too,” Dunsford explained in an interview with Dwyer & Michaels which you can listen to here.

“I reached out to them the day after that show and told them I’m coming to some shows — I’ve got tickets to multiple shows — and I wanna make sure that I’m not gonna be thrown out, because it’s a pretty far travel for me to go to this,” he continued. “They didn’t tell me not to come or anything, so I just went out there [to Wichita].”

Dunsford is being accused of leaking songs the band recorded in the early 2000’s. He received an email from GN’R’s legal representative telling him not to attend while he was in line.

“About two and a half months ago, I drove to Virginia, and there was a storage locker that belonged to Tom Zutaut [former GN’R A&R Rep],” Dunsford recalled. “He didn’t pay his bills or something and it was auctioned off. The individual that bought the locker, there was about 20 CDs in this locker of unreleased Guns N’ Roses music from around ’99 to 2000 or 2001.” He and a few other fans scraped up $15,000 to purchase the music from the guy who now owned the locker.

Reps for the band reached out asking for the material back with an agreement being made to give him his money back. They later voided the agreement though. “I know the seller that I bought them from was continuing to sell to other individuals, and there was a massive leak. So pretty much, I’ve been blamed for this,” he says.

“[The ban] is pretty much for the rest of my life, is what the head of security in that video was telling me,” he concluded. “They made it clear that if I am spotted at all, I will be arrested on the spot…I was supposed to go see them this Sunday.”

What do you think of Guns N’ Roses banning the superfan from attending their live shows? Let us know in the comments below.