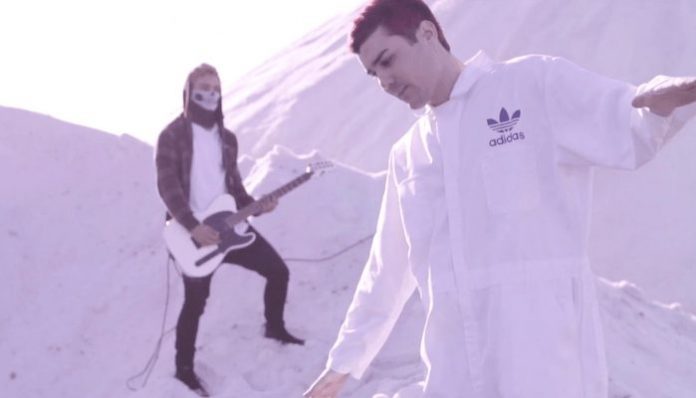 Hopeless Records is home to some of our scene favorites including Neck Deep, New Found Glory, Sum 41 and Taking Back Sunday—just to name a few.

With 25 years under their collective belt, the label is now expanding their genre diversification even more with their first emo-rap blended signing.

Today, the label announced Chicago-based singer dying in designer will be joining the ranks with the release of a new track, “Devil’s Callin’.”

dying in designer, aka Bobby O’Brien, joining Hopeless makes total sense as the artist grew up on a plethora of scene staples including blink-182 and Green Day. He delved more into the rap side of the music world in high school, in turn fusing the two genres together.

As for his first release via the label, O’Brien is getting real about relationships.

“‘Devil’s Callin’’ is about saying you feel better about moving on from a past relationship, but in reality you don’t,” he explains. “This song means a ton to me, and you can actually feel my anger in the first four bars of the verse.”

“Mentally, I was preparing myself to move on and it was the turning point in my relationship,” he continues. “I was lying to myself the whole time until it eventually became true.”

Check out dying in designer’s new track here or below.

Read more: Emo rap is the fastest-growing genre on Spotify in 2018

We listened to a lot of Drake and Post Malone last year on Spotify, according to the music streaming giant’s yearly roundup for 2018. But perhaps the biggest surprise is that emo rap is the genre that grew the most on the platform.

Indeed, “EMO Rap” (we’re unsure on the odd capitalization) tops the list for growing genres, while the aforementioned Aub and Posty line up with the late XXXTENTACION in dominating the tunes the world heard on Spotify in the big one-eight.

The burgeoning style’s sound is usually said to be typified by artists such as Lil Uzi Vert, Lil Xan, lil aaron and the late Lil Peep. Its scope resides in close proximity to that of so-called “SoundCloud rap” and other hip-hop offshoots.