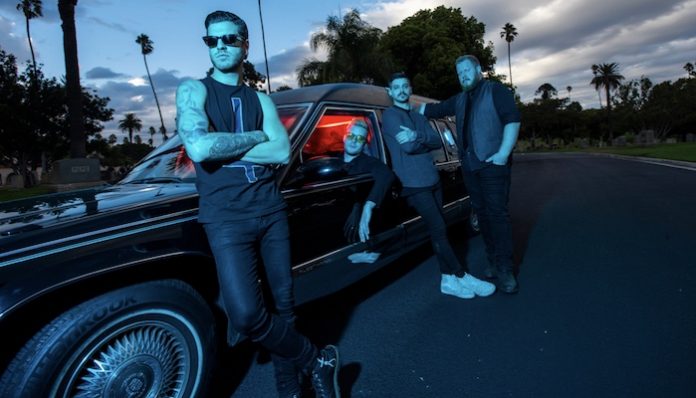 Ice Nine Kills are honoring their former bassist Shane Bisnett after the musician passed away in January at the age of 31. Bisnett was in the band from 2009 to 2011 as the bassist and clean vocalist. He played on the band’s second album, Safe Is Just A Shadow, which was released in 2010.

The band are offering new merch and an unreleased song to benefit Bisnett’s family. They announced the release of a shirt showing Bisnett in his element, as well as one of Bisnett’s songs performed by the band’s guitarist, Justin “JD” deBlieck.

The band announced the new shirt and song, “Sunrise,” via Twitter earlier today.

“As many of you know our former bassist and dear friend Shane Bisnett passed away earlier this year,” the tweet reads. “To honor Shane’s memory, we’ve released a shirt and one of Shane’’s songs recorded by JD. All proceeds will go directly to Shane’s family. http://ink-merch.com.”

As many of you know our former bassist and dear friend Shane Bisnett passed away earlier this year. To honor Shane’s memory, we’ve released a shirt and one of Shane’s songs recorded by JD. All proceeds will go directly to Shane’s family. https://t.co/LvnUx7cnLz pic.twitter.com/CEDUVL0GaL

“Sunrise” was originally written by Bisnett in 2007, with deBlieck looking to perform the track exactly as his late friend intended.

“Twelve years ago, I met one of my best friends,” deBlieck says. “He was kind, fun, unique, full of happiness, thoughtful and by far the most talented person I’ve ever met. From the moment we were introduced in the spring of 2006 at Finger Lakes Community College, we were inseparable. We spent days and nights creating music and summers at our parents’ houses planning out our lives like kids in love with a dream.”

deBlieck shared that Bisnett had shared several tracks with him, but “Sunrise” stood out to him the most, describing it as “extra special” and “a reminder of the raw talent and simplicity of Shane’s musical brilliance.”

“Among the many songs he shared with me, I chose to recreate this one because he left me a way to include him at the end,” deBlieck continues. “Although a bit haunting, I feel at peace knowing that his voice can be heard one last time. He left us too soon, but with this song, he’ll have marked his stamp in history.”

You can stream the new song, released under the artist name Fallbrook, here or check it out below. The shirt is also available for purchase here.