Ice Nine Kills packaged a horror-themed parody cover of Fountains Of Wayne‘s hit track “Stacy’s Mom” featuring none other than Jason Voorhees and his mother Pamela from the original Friday The 13th film.

The “Jason’s Mom” video is the metalcore band’s contribution to Fearless Records‘ Fearless At Home livestream event and arrives just in time for Mother’s Day.

The video is acting as a tribute to numerous people and anniversaries. The song itself is, of course, a way of paying tribute to the life of Fountains Of Wayne founder Adam Schlesinger, who tragically passed away due to complications relating to COVID-19.

On top of that, it’s obviously lining up with Mother’s Day and also the 40th anniversary of the first Friday The 13th film.

Speaking on the new video tribute to Schlesinger and the film’s 40th anniversary, vocalist Spencer Charnas says the song is a perfect way to celebrate.

“Today marks the 40th anniversary of Friday The 13th and with tomorrow being Mother’s Day, we thought this acoustic cover would be the perfect way to celebrate. We want to dedicate this to the memory of the inspirational songwriter Adam Schlesinger, who co-wrote this amazing and enduring pop song for Fountains Of Wayne. We hope all the Moms out there have a truly killer Mother’s Day.”

On top of the new video, the band are also revealing a “Mommy Knows Best” merch line via Nightmare On The Ninth. 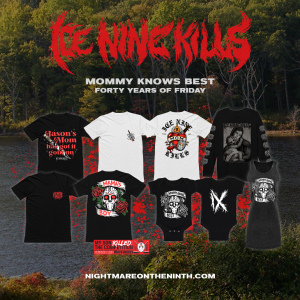 Now, we’re getting to see the parody cover which puts an acoustic spin on the song. It’s a full band effort though with all of the members joining in from different rooms.

Vocalist Spencer Charnas is also hosting a live Q&A with Ari Lehman who is the first Jason Voorhees actor during the livestream.

During the chat, they discuss working together on an acoustic version of the band’s song “Thank God It’s Friday” as well as the timing of the film originally arriving around Mother’s Day. Later in the chat, they also talk about Lehman landing the role of Jason, the script changing as it was being made and what he thought of the film while it was in production among other things.

What do you think of Ice Nine Kills’ new “Jason’s Mom” parody cover video? Let us know your thoughts in the comments below.