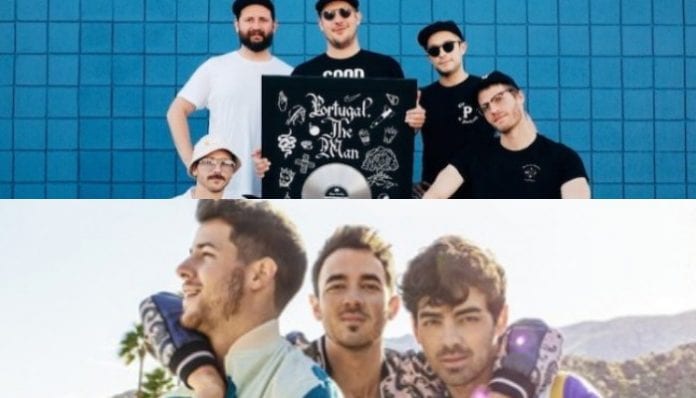 Portugal. The Man have lashed out at the Jonas Brothers for thinking the trio’s new song sounds like one of their hit tracks.

The Jonas Brothers broke the internet last week with “Sucker” and it was pretty much impossible to avoid.

Apparently, the band members of Portugal. The Man listened to the song and thought it sounded a lot like their track “Feel It Still.” They made a tweet about the similarity and even tagged the Jonas Brothers.

“To be fair, the chorus of Feel It Still sounds very similar to Please Mister Postman by the Marvellettes… Which we respectfully cleared and thanked them for every chance we got. As one does. @jonasbrothers,” the tweet reads.

To be fair, the chorus of Feel It Still sounds very similar to Please Mister Postman by the Marvellettes… Which we respectfully cleared and thanked them for every chance we got. As one does. @jonasbrothers

We definitely can see where they are coming from when we listen to the track.

The band later clarified their comment when asked if they were “mad” at the Jonas Brothers: “Not mad at all. Actually dig a lot of their music and Nick’s solo records.”

Not mad at all. Actually dig a lot of their music and Nick’s solo records https://t.co/tjeTMdRpBk

See what fans had to say on Twitter about the two songs being compared below.

Ok, but why does the new Jonas Brothers song #sucker sound exactly like feel it still by Portugal. The man?

||: So as much as I love the new Jonas brothers song “Sucker”, it sounds an awful lot of Portugal the Man “Feel It Still” and im frustrated

As someone that is a Portugal. the Man fan AND very happy that the Jonas Brothers are back, I do not think Sucker and Feel it Still are at all similar enough for all of this accusation

You can listen to the two tracks below to determine the similarity for yourself.

What do you think of Portugal. The Man calling out the Jonas Brothers? Sound off in the comments below!

How well do you remember “Love Like Woe” by the Ready...