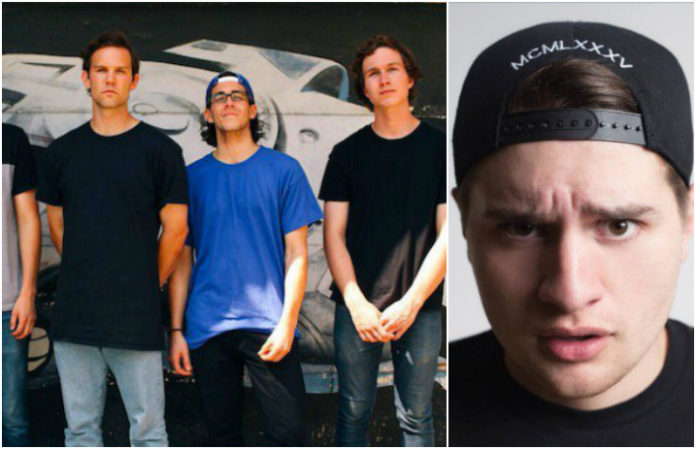 Earlier today, YouTuber Jarrod Alonge uploaded a shirt to his site that says “Kanookla Pook: Everything is so phonetic,” inspired by a band pronunciation video he published to YouTube in 2014.

Knuckle Puck’s John Siorek and Joe Taylor responded to Alonge’s new merch, showing that it is a direct comparison to the group's own merch and creative design.

Alonge responded with a YouTube video to explain his side of the issue, claiming it all revolves around satire. In the video, he says his take on the shirt is a parody, meaning he is avoiding trademark infringement because it is simply inspired by the original work. He then compares it to the Playstation shirt Knuckle Puck released earlier this year.

“Playstation isn’t glued to some kind of high horse acting like they’re the greatest name in the video game scene and that they’re changing lives and saving lives through video games and that it would be complete blasphemy to make a joke about them in any sort of way. But most people in 2016, they understand a joke when they see one.”

My all-time favorite (and pettiest) band beef has finally come to fruition.

I was honestly just trying to enjoy my lunch, I didn't realize you were still salty about me mispronouncing a band name over 2 years prior. https://t.co/Ooc3uOXzDO

Because it's also a similar shade of green and the text is in the same format as every other pop punk shirt ever designed since 2010? https://t.co/ZqnWfiawBS

However, Knuckle Puck sees this as more than simply a parody. In their eyes, Alonge is using Knuckle Puck’s name and a rip off of their lyrics to make money. While Alonge brings up the example of Knuckle Puck’s Playstation T-shirt, they see it as standing on different standards. Playstation does not make shirts for a profit, so Knuckle Puck’s tees would not directly hinder Playstation making money. But, because Alonge’s shirt is based on already-produced Knuckle Puck merchandise, there is a direct selling conflict, which could affect sales.

.@JarrodAlonge take the shirt down. Now

Great would be making money off of not our band. You got the chode part right https://t.co/l6lbgkvp4j

@JarrodAlonge (for those who don't understand, i meant we aren't friends, we never will be, everything you're about sucks, fuck you)

Real Friends’ Dan Lambton joined in the discussion, along with rationale., the group consisting of members of both Real Friends and Knuckle Puck.