The band's instruments have yet to be recovered.

Earlier this month Lamb Of God fell victim to theft after two of their instruments went missing following their show in Phoenix. According to guitarist Willie Adler, his “main beloved Warbird” guitar and a hand-painted Jay Ceerva bass were stolen. Now, three men have been arrested in connection with the theft.

Adler took to Instagram to reveal that the band’s gear had been stolen May 2.

ATTENTION ALL…and particularly in the Phoenix area. My main beloved Warbird, along with @jayceerva one of kind hand painted bass; were stolen early Thursday morning from @akchin.pavilion in Phoenix. The pieces of shit that did this are suspected to be employed by @akchin.pavilion. local hands that were working Wednesday, our tour production day. Apparently, they waited around for all to leave, and made their way into the back of our semi to commit this felony. AGAIN..under the watch of @akchin.pavilion and their security. Karma is a fuckin bitch…

According to Phoenix New Times, Phoenix police confirmed that someone with the username “Clash With” tried selling the Warbird guitar on OfferUp.com on Saturday, just three days after the post-show theft.

Now, William Widener, Justin Petersen and Michael Blakeslee have been arrested and charged with theft and trafficking stolen property, according to AZ Family.

Widener and Blakeslee were arrested on Wednesday, May 8, just before 10:30 p.m. while Petersen was arrested the following day.

The instruments have yet to be returned.

Hatebreed’s Jamey Jasta noticed the news report, taking to Instagram with the caption, “The bad news is you’re going to jail, the good news is you’ve been cast to star in the next Rob Zombie film!”

Lamb Of God frontman Randy Blythe commented on Jasta’s post stating, “Well, I must say that their, ahem, “aesthetic” doesn’t really surprise me- just kinda makes me sad. But on the 100% serious tip- these men are innocent until proven guilty, & I hope they are given due process and a fair trial. Then, whatever happens after, I hope they get some help. That one Alfalfa looking dude needs a sandwich, about a week’s worth of sleep, and a multivitamin. Jesus. #drugskill#dontdodrugskids” 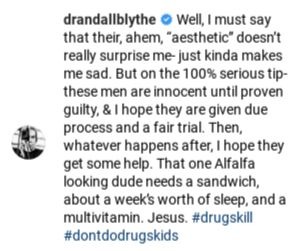 Lamb Of God are currently on tour with Slayer, Amon Amarth and Cannibal Corpse. Tickets and a full list of dates are available here.