The drama continues to unravel as Noah Cyrus took to her Instagram stories yet again to offer up her side on her breakup with Lil Xan.

As previously reported, Xan claims Cyrus cheated on him while Cyrus claims Xan dumped her over a Charlie Puth-inspired meme and it was actually him that cheated on her.

“If it was fake, why would I be asking you to come over to hang out?,” Cyrus posted. “Why would you be saying ‘good morning baby,’ and why would my name be ‘Noey ????’ in your phone?”

Cyrus continued her post by asking Xan to end their fight peacefully off of social media. 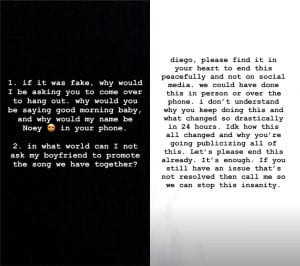 The sentiment may make you think Cyrus ended there, but the singer continued to unveil details by sharing a screenshot of a conversation. Originally posted by a fan account for Lil Xan, the messages are allegedly from the girl who gave the rapper a hickey.

The girl states her friend knew Xan from high school, and they reached him through his manager in order to hang out with him for the night.

“The things that happened that night were not supposed to go any further than the people [who] were there that day, which is why I posted a caption ‘what happens in LA (stays),’” the message reads. “I had no idea the hickey would be seen, and I never intentionally meant to hurt him or Noah’s relationship.” 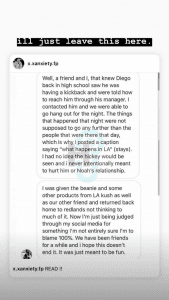 Chances are, we’ve all had our fair share of messy breakups. You or your partner may have said some things you regret whether via text or on social media. Singer Noah Cyrus and rapper Lil Xan are no exception, and their breakup might just be the most emo thing we’ve seen all year.

The couple are no longer together, and it may be as a result of a meme, but not the VMAs-inspired one you’re probably thinking of.

The drama started over the weekend as Lil Xan (aka Diego Leanos) took to his Instagram stories to reveal he felt like he was being cheated on and “bad things always happen to the good guys,” so he’s going to be an asshole from now on. 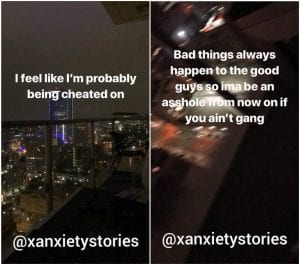 Xan continued to vent to his followers, stating “Yo, it just hurts so fucking bad. You think you know somebody, and then you just get used. Literally my whole life is just being used.”

Cyrus shared a photo with producer/DJ Ookay Sunday afternoon, which seems to have prompted Xan’s reaction as he shared a screenshot of it with his opinion.

Shortly after, Xan took to his stories again to announce a video for the former couple’s track “Live Or Die” would not be released because “people love to just hurt [him].” The duo dropped an audio version of the track last month.

Xan also went on Instagram live to further detail the reason behind pulling the video. “I’ve just been informed that basically it was all fake, and I’m being used,” the rapper reveals. “So fuck it, I guess I was just being used. I thought I was in love, but whatever.”

He further proved his heartbreak by putting a plaque for his track “Betrayed” in a bathtub and peeing on it—just in case the message wasn’t already clear.

THIS PLAQUE MEANS NOTHING MY FANS MEAN EVERYTHING

Of course, Cyrus didn’t stay silent on the subject, taking to her own Instagram stories to offer a tearful message to her fans about some days sucking, but it will be OK in the end.

.@NoahCyrus and Lil Xan appear to have broken up over cheating suspicions involving Charlie Puth.

.@LilXanfuhyobih also confirmed his music video with Noah Cyrus for their collab “Live or Die” has been canceled as a result of this. pic.twitter.com/kEKLURezXH

Cyrus followed up the video with a screenshot of the Charlie Puth-inspired meme that allegedly resulted in their breakup.

“I’m heartbroken and confused,” Cyrus explains. “This is the meme I sent Diego that made him think I’m cheating on him.”

Lil Xan breaking up with Noah Cyrus bc of a Charlie Puth meme is 2018 at its peak pic.twitter.com/cjqChvoiks

Cyrus went on live and passionately explained that she was always there for Xan despite him treating her as “a booty fucking call.”

Xan returned to live to state that the breakup had nothing to do with the Charlie Puth meme and rather manipulation by Cyrus. He also gave a shout out to Columbia Records, who represents both artists, for allegedly setting up their relationship as a publicity stunt to boost Cyrus’ career.

“You really think I’d break up over a Charlie Puth meme?” he asks “Yo, don’t send me a picture of a dick, Noah. Please, I don’t want to see a dick.”

He ended the live asking Cyrus to let it go and stated that he didn’t ruin her career.

Cyrus came back again and stated that the relationship was not set up by their label, posting text captions and a clip of an interview Xan did last month with Billboard where he stated he “slid into her DMs.” 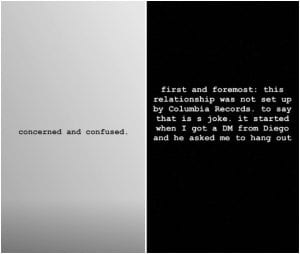 Cyrus claims that rather it started to crumble when she noticed a hickey on Xan’s neck. 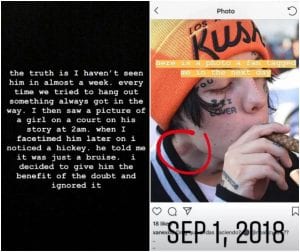 She then accused Xan of lying to feel less guilty about himself. 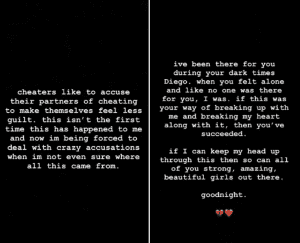 well… due to the circumstances i think i named this EP appropriately. good cry coming sept. 21 #GoodCryEP https://t.co/3IcM2fakDt pic.twitter.com/6X0GtN2P8E

Check out the track that we’ll (probably) never see a music video for below.

What do you think? Did Noah Cyrus use Lil Xan to boost her career, or did he break up with her over a Charlie Puth meme? Sound off in the comments.