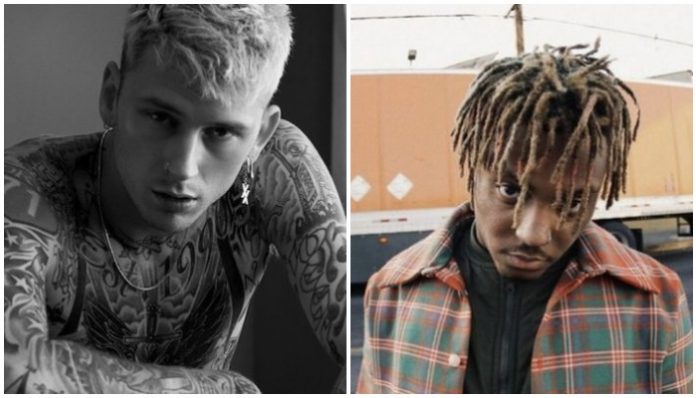 Machine Gun Kelly is providing some much-needed content while isolating during the COVID-19 coronavirus pandemic and he’s back again today with a quick ode to Juice WRLD.

The musician is consistently sharing various songs and quick videos of him riffing on his guitar and he’s back with another clip playing the intro to the late rapper’s track “Lucid Dreams.”

Last Friday (March 13), he ended up dropping a new track titled “Bullets With Names” featuring Young Thug, RJMrLA and Lil Duke. Earlier this week, he also released an official video for the song which you can see below.

With this one he had a little help from Omar Fedi. Fedi contributed guitar work on MGK’s latest Hotel Diablo including Lil Skies collab “Burning Memories” and “I Think I’m OKAY.”

Since then, Machine Gun Kelly has teamed back up with Travis Barker to work on upcoming pop-punk LP Tickets To My Downfall. Set to release this summer, YUNGBLUD, Bert McCracken, blackbear, Young Thug and more will appear as guests.

As he continues to show off his influences and favorites in the rock world, the Paramore,Red Hot Chili Peppers and Nirvana revamps are just the most recent of many. The rapper has also given his own take on Foo Fighters (“Everlong”), blink-182 (“What’s My Age Again?”), Linkin Park (“Numb”), Papa Roach (“Last Resort”) and more.

The clip follows MGK sharing a cover of Red Hot Chili Peppers’ “Californication” the previous night. In the first Instagram story post, he writes, “I’m gonna learn one new song every day this week. Which one tomorrow?”

one of these everyday of the week till we get to go outside, we all know this one right 🤔 #LockdownSessions Day 1.

Then, he followed that up with a cover of Nirvana‘s classic “Smells Like Teen Spirit.”

don’t play it perfect, just play it like u mean it. 🎸🤘🏼 #LockdownSessions Day 2 – which song next??

On March 19, a fan asked Mod Sun if he would drop a new track due to the pandemic and he responded with a teasing reply.

How about one with one of your favorite artists too? https://t.co/Nw9bFpHGp0

Now, Mod Sun is taking to Instagram to post a video of him teasing the track again. He’s wearing a facemask and reminds fans to practice social distancing.