We think we’re very OKAY with this happening again.

“I Think I’m OKAY” marked one of the best collabs of the year with an epic mashup between Machine Gun Kelly, Travis Barker and YUNGBLUD. Now, it looks like the rapper and blink-182 drummer are looking to recreate some of that magic.

We know Barker has been getting in the holiday spirit with blink-182, revealing earlier this month the trio recorded a Christmas song. But it looks like he’s spreading the studio love by teaming up with MGK again this week.

During the production process for MGK’s latest Hotel Diablo, the musician and Barker continued to tease studio session first in February. The duo were later joined by YUNGBLUD, sparking theories about a potential collab further fueled by a return to the studio two months later.

The trio began filming a video for the unreleased song at the end of May, a few days before AltPress caught the live debut of “I Think I’m OKAY” at Bunbury Music Festival. The trio dropped the track on streaming the following week with the video relreasing shortly after.

Now, earlier this week, Barker took to his Instagram story to share a Boomerang of MGK in the studio, simpling tagging the musician with no context.

Read more: The 50 best albums of 2019 in alternative, punk, alt-pop and beyond including Machine Gun Kelly, blink-182 and more

MGK shared Barker’s story to his own, adding a pen and paper, thought bubble and zipped lips. While not explicitly said, the emoji choices have our fingers crossed the duo are hard at work at another collab. 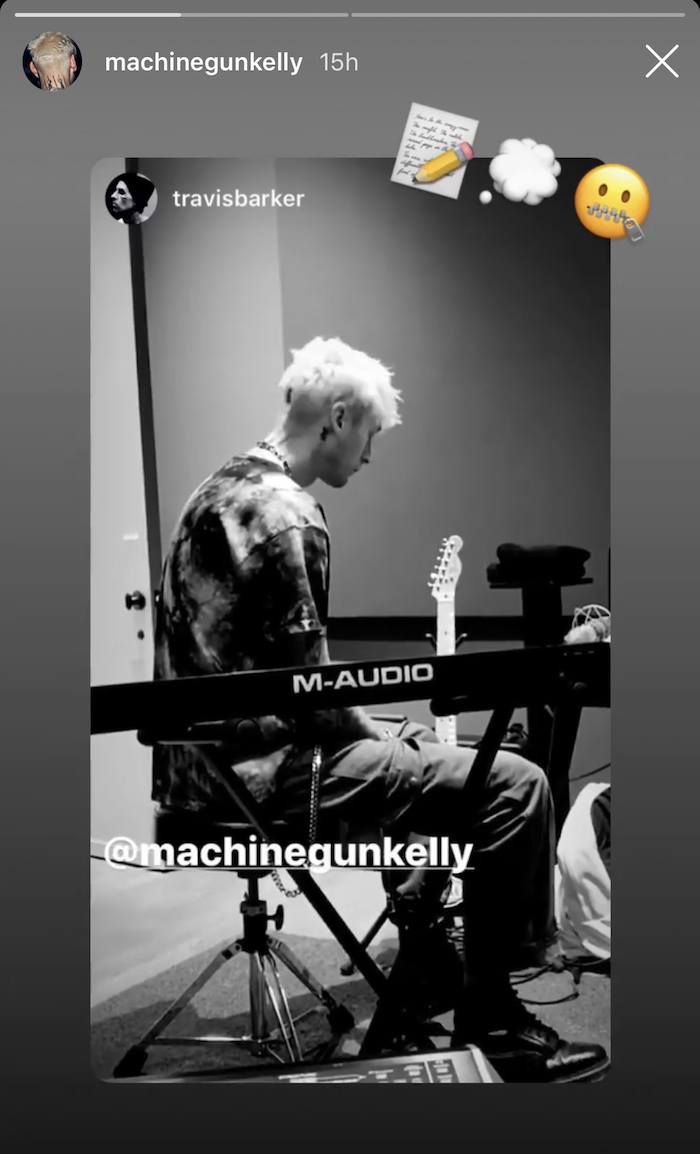 Barker then took to Snapchat to share a pan of the filled studio, which included Machine Gun Kelly again.

While Barker did play drums on “I Think I’m OKAY,” the musician has offered both that and production credits on other recent releases. Among those are Vic Mensa’s debut self-titled 93PUNX full-length, a collab with Lil Nas X, “F9mily” off his debut EP and more. With this in mind, Barker might not necessarily be playing drums with MGK.

What do you think of Machine Gun Kelly and Travis Barker heading back to the studio? Let us know in the comments below!