blink-182’s Mark Hoppus has discussed bringing back his classic bass if the band decides to do more anniversary shows, sending fans into a frenzy.

It all started when Hoppus posted some photos of his “serenading” drummer Travis Barker on Instagram.

“Sometimes Travis asks me to serenade him,” the caption reads.

Sometimes Travis asks me to serenade him. 📷 @clemente_310

The post caused someone to aks why he doesn’t use his old bass in commemorative shows. Hoppus responded, saying that “its pickups and gain structure are way different than the others I use.”

Then, the same fan said because it’s a “commemorative show” that “everybody wants to see the old one.”

“@robertnoise and I discussed it and if we do more of these anniversary shows it’ll be there,” Hoppus responded.

You can see a screenshot of the comments below. 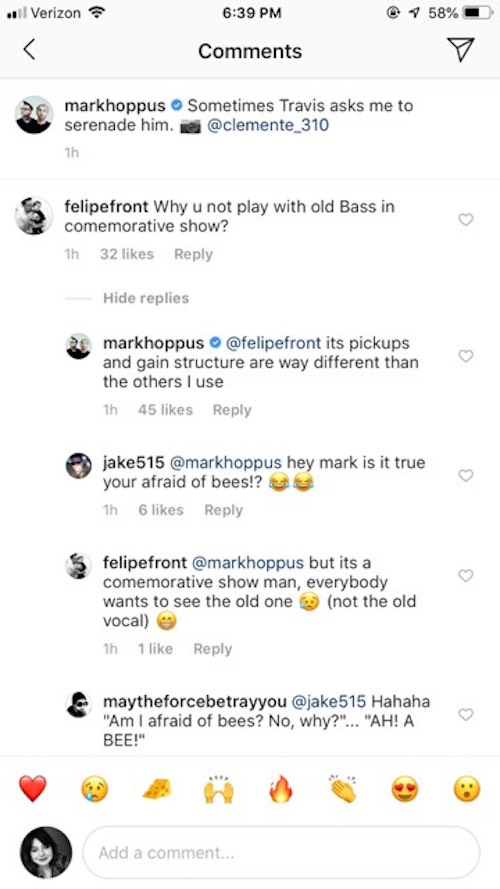 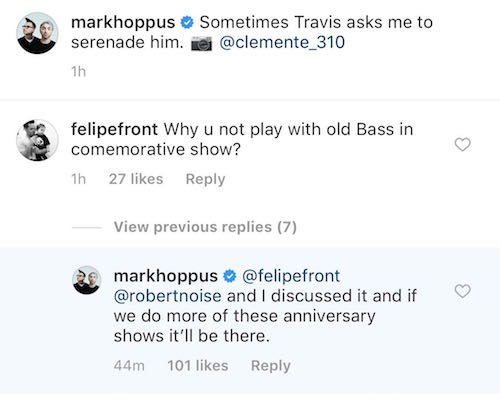 Could this mean the band plans on doing more anniversary shows with their old equipment? Sign us up!

The comments about possible commemorative shows come after the band just played their entire album Enema Of The State in full. That setlist included  “Aliens Exist” and “Anthem,” which were performed live for the first time with Matt Skiba instead of Tom DeLonge. It was also the first time they performed those tracks in nearly two decades. You can see the full setlist below.

Set list from last night at @backtothebeachfest. Had a blast playing #enemaofthestate front to back.

Many fans in the comments asked for them to play the same setlist at the upcoming Vans Warped Tour 25th anniversary show. The band will join the festivities for the Atlantic City stop.

Please do this at Warped Tour

blink-182 are gearing up for their next album, which will be out “early summer” according to Hoppus. This lines up with Barker’s previous statements that the record would be out by the time the band hit the Warped Tour 25th anniversary show’s stage in Atlantic City.

Hoppus also said the band is trying out something new with their song structures when writing the follow up to 2016’s California.

“We’re trying to get away from picking up an acoustic guitar and starting a song that way,” he said. “We’ve been writing songs based around beats that Travis has come up with, or maybe just a keyboard line or one little guitar riff and building around that.”

This is not the only recent clues we’ve gotten from Hoppus about the upcoming LP. He said the album may go in some “completely weird directions.” He also stated that he hopes to guide the anticipated eighth album into artistic territory akin to the band’s untitled 2003 full-length, an album where musical experimentation first consumed the outfit.

“After playing in this band for 27 years, I want to push it and do different things and take blink to places where we haven’t been before,” he said explains. “We’re really trying to do that on the new record. We want to do with our band what we did in 2003 with Untitled, where we take our foundations and go off in completely weird directions.”

Hoppus isn’t the only bandmate teasing us about the LP, Barker recently gave a little sneak peak as well. Barker sustained an ankle injury, and took to Instagram to share a snippet of potential new music from the trio.

Check that out below.

What do you think of blink going on more commemorative shows? Sound off in the comments below!