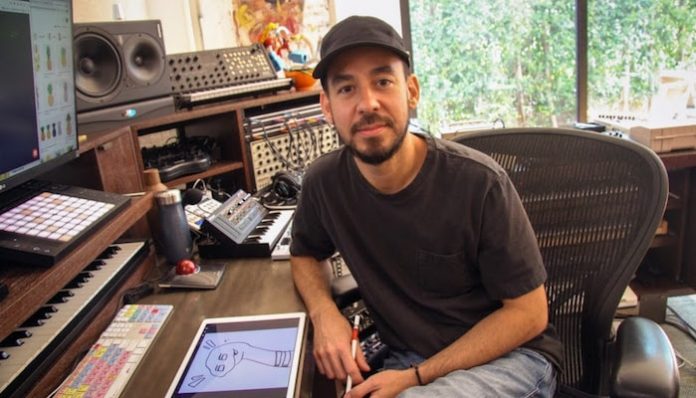 Due to coronavirus, Mike Shinoda has been spending his time in quarantine livestreaming on Twitch. From dropping secrets regarding unreleased Linkin Park music to experimenting with new tracks, Shinoda has been using the platform to connect and engage with fans.

Now, Shinoda has revealed that his latest album Dropped Frames, Vol. 1 was made entirely on Twitch. With the help of viewers around the world, the album features 12 tracks that were all created with input from fans.

Read more: Even Jason Voorhees knows how important face masks are in a new PSA

Shinoda has been using Twitch as a way to remain productive amid the ongoing pandemic. During his streams five days a week, Shinoda has been making music while dedicating one other day to creating visual art. Throughout this process, fans have been giving input on the songs and beats he has created.

Now, Shinoda has decided to compile 12 of the tracks he worked on through Twitch to create his new album Dropped Frames, Vol. 1. For the LP, Shinoda selected instrumental songs created in collaboration with Twitch viewers. The album’s opening track “Open Door” is the only song to feature vocals.

Viewers participated in the creation of these songs by communicating through live chats and giving feedback. As fans continued to give feedback, they earned points called “ShinodaBucks” which they could spend on various musical genres including mariachi, “Bollywood hip hop” and more. Shinoda would then mash all of the selected genres together during the streams to form one track.

Through all of this, Shinoda was able to explore new ways of creating music with his fans. Dropped Frames, Vol. 1 essentially connects music, technology and community into one full album.

“Dropped Frames is just as much about the live channel as it is about the ‘album,’” Shinoda says. “The collection of songs is a highlight reel of the tracks I make on the channel, but a big part of the experience is the stream itself. When I start, I usually have very little idea of where it will go. What comes out is a product of the viewers’ suggestions, my spur-of-the-moment ideas, and whatever inexplicable magic is floating in between.”

In celebration of the album’s announcement, Shinoda has released three new songs. “Open Door” is the only song to feature vocals while “Super Galaxtica” and “Osiris” are both instrumental tracks.

While making “Open Door,” Shinoda received hundreds of user-generated vocal submissions from viewers. Ultimately, he incorporated seven of those into the final recording. As well, “Super Galaxtica” stems from a Nintendo Game Boy sound and “Osiris” features various flute loops.

For Shinoda, he had a clear reason as to why he wanted to release an album that features almost no vocals.

“‘Open Door’ is the only vocal-led song in the album,” he shares. “In times like these, when so much is being said, I felt an album of wordless tracks might hopefully give fans a place of respite—a break from the chatter. Listen to them while you chill, while you work, while you paint, while you eat, while you play…wherever they fit into your life.”

Dropped Frames, Vol. 1 is out July 10 via Shinoda’s own Kenji Kobayashi Productions (ADA). The new album follows up his most recent full-length LP Post Traumatic that was released in 2018.

Pre-orders for Dropped Frames, Vol. 1 are available to purchase here.

All three of Shinoda’s new songs are available to stream below.

Are you looking forward to Mike Shinoda’s new album? Let us know in the comments below.