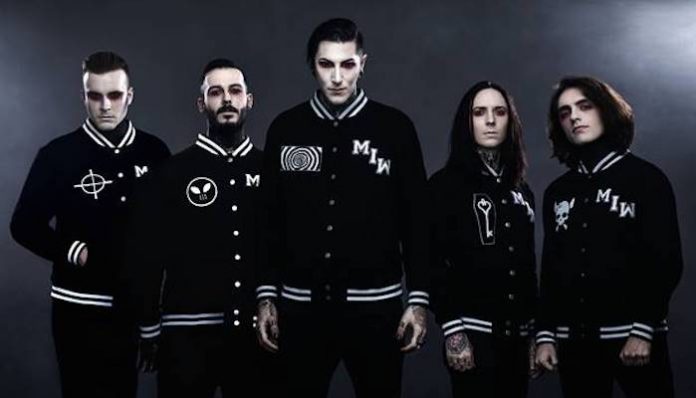 Motionless In White have opened up about what it’s been like to open up for the Alice Cooper and Halestorm tour this summer, including the awkward moments.

Chris Motionless spoke to Oklahoma City radio station Rock 100.5 The KATT about the summer tour and what the crowds have been like.

He first talked about what it’s like to perform to a crowd that isn’t very familiar with your music.

“The most awkward moment for us was the first two or three shows,” Motionless said. “We played ‘Necessary Evil’ and it didn’t click in my brain until we were just about to get to the chorus. I’m like, ‘Oh boy, some of these older people are going to know where the ‘It’s my party thing is actually from.’”

“A lot of the younger fans don’t know, or they think it’s Melanie Martinez or something, but a lot of these older fans are going to know and be like, ‘What the hell am I witnessing right now?’” he continued. “So that was the most imploding, ‘Oh god, I want to die right now singing that part watching them just be like ‘What the fuck is this?’ But it’s still been really fun.”

Motionless also later discussed the sales and reaction to the band’s most recent album Disguise.

“We had a great first week that we were honestly surprised about. We felt like the trend of how sales are going with CDs, we would drop considerably from our last record like most bands are doing, and we actually did not drop more than just a few percent from the last record, which was, like, ‘What the hell?’ It made us feel really good.” he said.

He then talked about the band’s “diehard fans” that want to see Motionless In White succeed.

“When you’ve been a band for over ten years, that means a lot. Every year you’re a band after a certain amount of time, those moments mean so much more to you. It’s been great. They’ve been coming out to these shows, like I said, where they don’t necessarily have to. They’re here and supporting and they’re getting a great show from Halestorm and Alice Cooper along with it.”

You can see the full interview below.

Presumably inspired by the film of the same name (especially given the band’s past flick-inspired merch), the band will hit the road beginning in September with We Came As Romans, After The Burial and Twiztid.

MIW are wrapping up their support with Alice Cooper and Halestorm this month. The Trick ’r Treat tour kicks off in September with a one-off show having the band join In This Moment and New Years Day for the former’s Mother’s House of Horror Traveling All Hallow’s Eve Masquerade. MIW will also be hitting several festivals including Louder Than Life, Aftershock and A Day To Remember’s Self Help Festival.

The Trick ’r Treat tour goes on sale this Friday. Check out a full list of dates below with tickets are available here.

What do you think of the way Motionless In White described playing for the Halestorm and Alice Cooper crowd? Sound off in the comments down below!