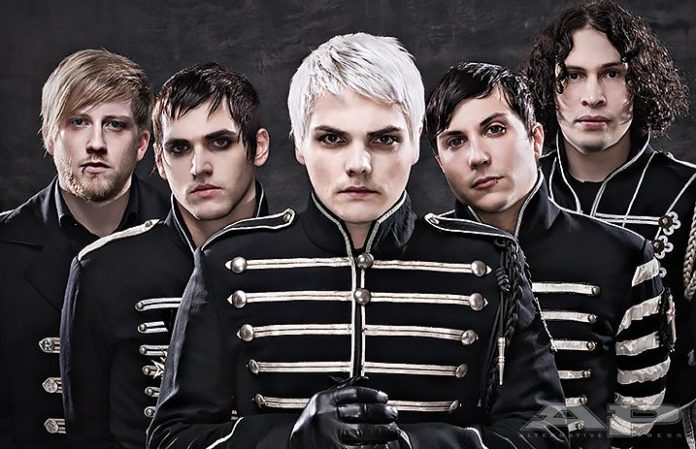 Rumours of My Chemical Romance getting back together have been spreading like wildfire the past few months, and even though that’s not happening they do have something new.

The band are releasing a new merch line of distressed t-shirts with a super vintage look.

Read More: blink-182 throw it back to Myspace with custom site for ‘NINE’

While fans are undoubtedly excited for the new merch items, many feel teased about there not being a new music announcement.

How dare MCR email me about new merch but not new music ✋🏼 pic.twitter.com/6KRLZYXrkI

When you suddenly get an email alerting you to a new MCR merch collection, weeks after Joe Jonas said they were rehearsing in New York #constantvigilance pic.twitter.com/K16VxgN0ag

Hey @MCRofficial can you guys stop emailing me about limited edition merch and start emailing me saying that you’re getting back together? Thanks.

Reunion rumours began after Joe Jonas claimed that while Jonas Brothers were rehearsing in New York, MCR were apparently there rehearsing right next to them.

Those were quickly shut down by Frank Iero, though he left the door cracked for a victory lap someday.

Former MCR member and current member of Reggie and The Full Effect James Dewees also reportedly teased some inside news on the band.

While on tour with Frank Iero and the Future Violents, Dewees allegedly brought up the band at various shows and told fans “they might be working on something.”

Unfortunately, a representative of James Dewees’ team reached out soon after to clarify his onstage comments were concerning work with a project not related to My Chemical Romance.

The release states “The ‘You Wear Me Out’ T-shirt Collection has subtle distressing along the neckline and sleeve hem for a truly vintage look. The unique garment-dye process creates subtle variations, so no garment is exactly alike.”

New music from the band clearly isn’t happening anytime soon, so the new shirts will have to do.

The new merch line is limited and only available for a small amount of time. You can pick up the new merch items here.

What do you think of the new distressed My Chemical Romance merch line? Let us know in the comments below.