My Chemical Romance just reached a huge milestone with “I’m Not Okay (I Promise)”, and we’re celebrating it by blasting the song as loud as we can.

Will you join us?

“I’m Not Okay (I Promise)” is one of My Chemical Romance’s most beloved songs, and it shows. The track, off 2004’s Three Cheers For Sweet Revenge, is one of the band’s most listened to on Spotify.

The song is currently top 3 in the list of most popular songs, just below “Welcome To The Black Parade” and “Teenagers,” both off the group’s third album, The Black Parade. That obviously mean it has a ton of streams.

Yes, we agree that’s pretty amazing, and we’re obviously going to celebrate by giving it a few more spins.

Check out a screenshot of the band’s Spotify page below: 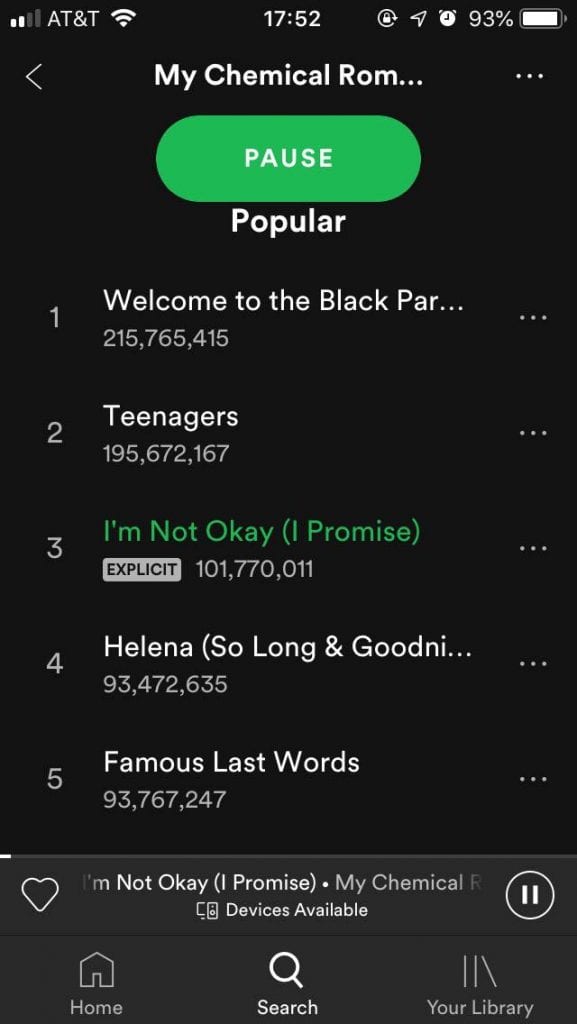 In other My Chemical Romance-related news…

Former MCR guitarist Frank Iero just shared some insight on that teaser trailer the band put out for the special 10th anniversary edition of The Black Parade. The video caused absolute chaos and mass speculation of a reunion tour, causing the band to share a statement clarifying they weren’t getting back together.

Many fans believed the stunt was a ploy from Warner Bros. to stir up publicity for the special edition, but apparently that wasn’t the case. Iero tells Seton O’Conner the band came up with it themselves during their yearly barbeque. They failed to realize how much furor it would cause.

“So what happened was, we wanted to do a 10-year anniversary release of it, and we had some demos left over and some songs that didn’t make the record and we were like, ‘Oh, cool. We’ll put it all together,” Iero says. “And we were like, ‘Oh, that would be really cool. We should do a little teaser trailer for it. Alright, that’s what we’ll do.’ So, we told the lady what we wanted, and they made this trailer, and we released it. And all of a sudden we were like, ‘Oh, wait. Everyone’s real confused.’”

And confused we were. The trailer spawned hundreds of broken hearts, even those of other artists.

“We were always a theatrical band,” Iero says. “So we wanted to continue in that fashion, but when you’re not a band any longer, it’s probably harder to do that. We didn’t realize.”

Although there aren’t any chances of My Chemical Romance getting back together in the near future, Iero is teasing something with his new band, the Future Violents.

The frontman has been actively answering questions about his new project on Twitter as well as announcing a couple new shows. Today, however, he teased a simple, “10 a.m. EST tomorrow” with a heart.

For Natasha Heinz, it was really not a phase. After spending 11 years reading Alternative Press in her hometown in Brazil, she moved to Ohio and landed a job at her favorite magazine. Now, she's constantly cold but sure as hell the happiest she’s ever been.