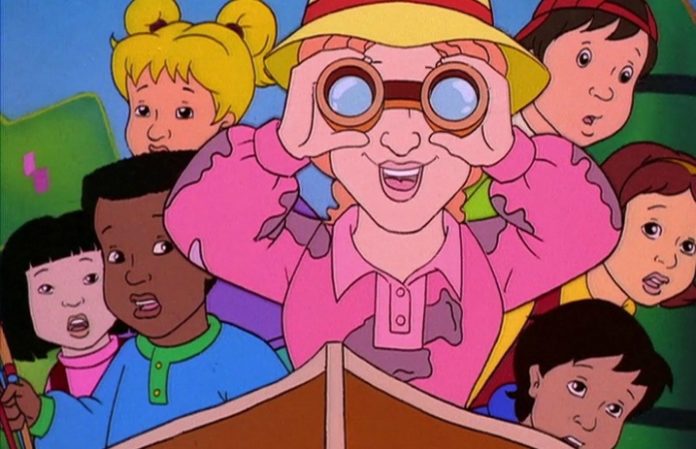 See what the internet has to say below.

Read more: There’s going to be a fourth Powerpuff Girl and we don’t know how to feel

The new show debuts Sept. 22, and it features a familiar voice on the theme song…

According to the short clip, the show will feature Ms. Frizzle’s younger sister, Fiona Felicity Frizzle, who has the same wild red hair and takes the students—now older—on similar science-filled, out-of-this-world field trips.

Lin-Manuel Miranda is beyond stoked to sing the theme song:

Hey Lin Magic School Bus is coming back do you want to sing th-
YEEEEEEEEEEEEEES https://t.co/OgV8ZMa4bE

But Twitter is torn. Plenty of folks are excited about the ‘90s show revival:

The fact that Kate McKinnon is the voice of Ms. Frizzle in the Netflix Magic School Bus reboot makes me so excited to watch cartoons again!

PSA A NEW ADDITION OF “THE MAGIC SCHOOL BUS” IS GONNA BE ON NETFLIX SEPTEMBER 22ND! IM DEAD.

Guys. Magic School Bus is coming back on Netflix. And Kate McKinnon is in it. Best news.

HOLD ON A DAMN MINUTE!!

Netflix is bringing back The Magic School Bus

However, lots of others are also disappointed at what they’ve seen so far:

I feel like mrs. Frizzle's new hair in the new magic school bus completely defeats the purpose of her being mrs. Frizzle

“No worries, I can finish this important email later. Tell me more about your negative feelings about the Magic School Bus reboot.”

So Netflix is making a reboot of Magic School Bus. Not sue how I feel about this. https://t.co/pUNUUr0ZnO

Was there something wrong or outdated about the original Magic School Bus? No.

What are your thoughts on The Magic School Bus reboot? Let us know in the comments below!