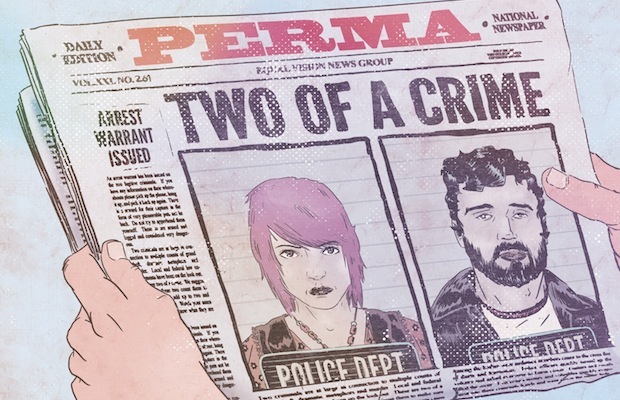 Perma, the side project of married duo Max Bemis (Say Anything) and Sherri Dupree-Bemis (Eisley) have announced that their debut full-length, Two Of A Crime, will be released Oct. 29 on Max's Rory Records, an imprint of Equal Vision.

Additionally, the group have made the title track available for streaming. Listen below:

And take a look at the cover art and tracklisting for Two Of A Crime:

Perma plan to tour this winter, with dates expected to be announced in the coming weeks. The Bemis' main projects, Say Anything and Eisley, recently wrapped a tour together. Say Anything are expected to begin recording a new album this fall, while Eisley's latest, Currents, was released last spring.

Below, check out some background on Two Of A Crime from Max:

“I love being in Say Anything, and I plan on continuing to do so for as long as I'm around. However, the history of that band is fraught with all kinds of ups and downs and demons and darkness. It's part of what makes it special. Perma is a whole other kind of animal. How much more organic and fun for a start of a band can you get then just having it be a private joke between two people falling in love? Sherri and I literally started writing songs together for the singular purpose of wooing each other, and once we got the wooing done, it was to continue to expand upon our love for one another. That's what Perma is, and it's pure in that respect. As Say Anything progresses on its manic spectrum of darkness and light, I realized I absolutely NEEDED to have an outlet to express the part of me I never have to doubt, which is my love for Sherri. Recording this record was literally like a sigh of relief. I'm so incredibly proud of this record.”

“We're both hopeless romantics, so getting to just have free reign on that topic and being able to let loose and even sometimes get a little silly about it was so natural and very true to who we are as a couple. We have a lot of fun together but also have a very deeply passionate love and I think this album captures both sides of that story.”