Fall Out Boy bassist Pete Wentz isn’t giving up on playing shows during the coronavirus pandemic as he livestreamed a “concert” using action figures of the band.

Wentz hit his Instagram story last night (March 23) giving fans a show using live recordings and toys for each member with various other action figures making up the “audience.”

The bassist set up a box of Life cereal as the stage for his toy show, with stage lights included for a more realistic show. With a live recording playing over the videos, the band “played” “Sugar We’re Goin’ Down” while Wentz played cameraman showing crowd shots and the on-stage action. You can see his posts below. 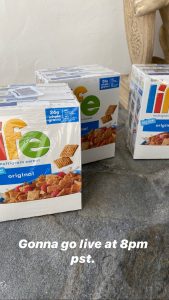 Pete Wentz also tried on the fangs he wore in the music video for “A Little Less Sixteen Candles, A Little More Touch Me” which one fan captured over on Twitter.

pete wentz trying on his fangs from the sixteen candles music video on IG live in 2020 is something i never thought i’d see pic.twitter.com/E6W067xSct

Yesterday, some of the band’s earliest material made its way onto YouTube with their self-titled demo getting uploaded.

The three tracks were pulled from an old cassette tape a fan had which was recorded prior to their debut album, Take This to Your Grave.

According to Discogs, the release was also printed as a CD and 7-inch vinyl on top of the cassette.

One noticeable difference is the third track is titled “A Nice Myth” on the YouTube clips. The vinyl and CD versions have the third song listed as “Moving Pictures” which the author of the videos acknowledges.

“This track is unique to the cassette variant of this release. On the CD and Vinyl release track 3 is instead “Moving Pictures”. Although I cannot confirm if that is an early recording or not as of yet.”

The first two tracks ended up on their 2003 EP Fall Out Boy’s Evening Out with Your Girlfriend which also features “Moving Pictures.”

This comes after fans were hit with the news that all of the From Under The Cork Tree era music videos were not on YouTube anymore.

The band’s videos were previously pulled from the site back in August 2018 as well.

Luckily, they came back very quickly but no answer ever came out of why they were taken down in the first place.

You can check out the demos below.