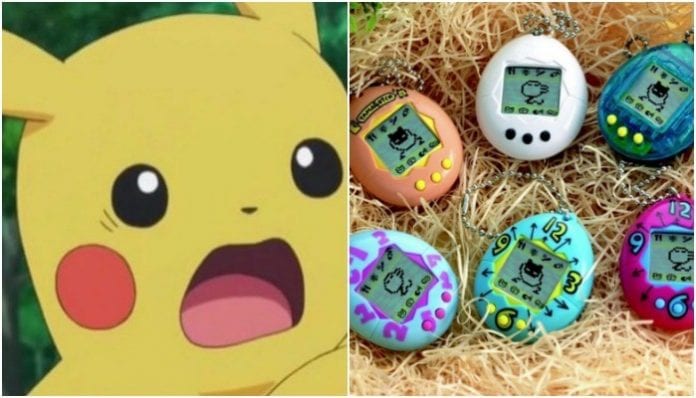 The worlds of Pokémon and Tamagotchi may soon collide. As a part of a promotion for Pokémon’s forthcoming Pokémon: Let’s Go games, a leak reveals that the franchise may have plans to collab with Tamagotchi.

Read more: Here’s Bring Me The Horizon’s setlist for the First Love tour

According to Comicbook, the leak suggests that the virtual pet game, Tamagotchi, is pairing up with the Pokémon franchise on their latest endeavor. The plans detail a special gaming device that will allow fans to care for an Eevee of their own. Then, they can evolve their Pokémon depending on how often they care for it. For example, if a player spends more time with their Eevee, it has the potential to evolve into a Ditto, or a Team Rocket Eevee.

Additionally, the leak shows two color choices for the gaming system. One is rumored to be brown to show off the traditional Eevee colors while the other is pink to show off the Pokémon’s evolutions.

You can check out the leak here.

While the leak only shows plans for the Eevee, there is no word on whether or not Tamagotchi will adopt a model fit for Pikachu too, like the Pokémon: Let’s Go games.

There is no formal confirmation, release date or price on the Tamagotchi and Pokémon collab just yet, as it still is just speculation based on a leak.

Tamagotchi and Pokémon were both very popular games from Japan in the ‘90s. However, Tamagotchi games have been increasingly hard to come by, with their latest model only being available for purchase online.

Will you be playing Pokémon: Let’s Go? If you will be, which version will you adopt? Sound off in the comments below.