We can’t wait to see him.

Swae Lee and Tyla Yaweh are set to support the rapper on the upcoming run.

He revealed a teaser video along with a simple caption saying “nov 2:)) @postyfest” and the same animated devil mascot from last year.

You can see the full list of tour dates below.

Post Malone made our goth dreams come true with his latest merch item which is an inflatable pool float in the shape of a coffin.

The float costs a hefty $75 but is bundled with a digital album. It’s a dark blue ombre design and includes a cup holder. It also reads “Goodbyes” on top. You can see what it looks like below. 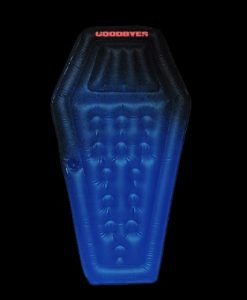 The rapper also recently dropped his collab track with Young Thug along with a video.

Watch Post Malone’s video for “Goodbyes” in the player below.

How excited are you for the upcoming Post Malone tour? Sound off in the comments down below!