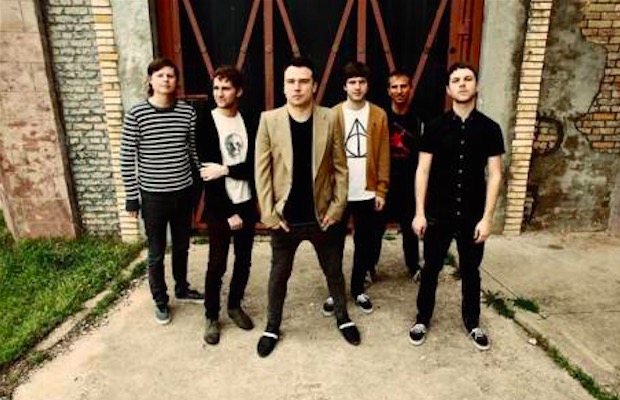 In a surprising turn of events, Say Anything have just dropped a stream of their new full-length album, I Don't Think It Is. The LP will be available for purchase this Friday, February 5. Stream the record in full below and read a lengthy message from frontman Max Bemis.

“Hi, this is Max (from Say Anything.) My team and I decided to forego the dying art of the lead‐up and share our new record “I Don't Think It Is” with you, right now, with no warning. Why? Obvious. I want to be like Bey. Not‐really‐kidding aside, I've become a bit weary of doing the same song and dance leading up to the actual end­game, people actually listening to something​. It also seems to fit with the core of this record: me destroying any notion of feeling blasé about music.

The recent history of Say Anything has been totally affirming. There was a nice little reaction to our last record, Hebrews, which was a step towards “progressive” (or “doing whatever the hell I want”). I suppose we have earned the right to remain somewhat vital. However, that entails trying new things. So without any plans for how it would turnout, I introduced a wild card into the equation…

Darren King is one of my favorite musicians ever. I love his band, Mutemath, and perhaps my favorite part of Mutemath is Darren's drumming and production touches. While hanging out, we somehow stumbled into the idea of making music together. Not just having Darren play on something, but collaborating fully on its production and creation. This is something I'd never done in 15 years of Say Anything and would be the closest I could be to being in a traditional “band”. The next day, we got a call to work on music for another artist (more on that later) and decided to make our first song together. From the starting point of that song, we spent the better part of a year concocting what is surely the craziest record I've ever made.

This LP was anything but premeditated. All I knew coming from Hebrews was that I wanted to try to create the “Twisted Fantasy” of Say Anything records (just shut up and let me say stuff like that). These songs were the product of boozy hours spent in the studio creating, playing, sweating, laughing, and doing stuff just for the hell of it, embracing the free‐spirited cliché of musicianship. I had no idea what Say Anything might become with such Not­Say­Anything aspects thrown in: a drummer who plays like Stewart Copeland and DJ Shadow's love child, samplers and analog weirdness, improvisational playing and, most importantly, relinquishing my dictatorial control over the band's output. My more obvious influences reared their heads (as always)– ‘emo', math rock, 90's KROQ playlists, and dubiously cred‐worthy pop punk. However, throwing Darren's aesthetic into the equation brought up latent aspects of my musical background and introduced completely new ones: early Beck, J Dilla, NYC Hardcore, something called “soul” music that I'm still trying to fully compute, and a lot more.

As the record formed some weird will of its own, it took on a loose thematic concept. My chronically anxious but brilliant best friend, Josh, became my bizarre muse and the centerpiece of the album's artwork. ​Josh spends too much time worrying and doubting himself, like most people I know. I wrote this record to say “this world needs its ass kicked and you're the one to do it.” It ended up being about empowerment balanced by the grubby quirks of the human mind, unmarred by some cliché sense of positivity. Similar to the way you can put on a Jay‐Z song where he's talking about an oppressed childhood dealing coke and still feel like you can take on the world. Grunge wasn't really about anything, but inspired the whole world to get angry. So this is my approximation of that notion…a record to yell along to, because we all need that sometimes.

Like most of the hip hop records that gave birth to our approach, “I Don't Think It Is” is defined by collaboration, and not just with Darren. I got to “jam, dude” with two of my post‐punk heroes, Cody Votolato of the Blood Brothers and Paul Hinojos of At The Drive‐In. Our collaboration inspired two songs on the record. Just as important were the “next gen” artists who've inspired me to keep caring about punk music: Christian from the Hotelier, Michelle from Little Big League and Zack from Backwards Dancer. The song “Princess” serves as a reunion of sorts for Zack and Christian, who once both sang in the Hotelier together. I recruited Tiny Moving Parts' Dylan Mathieson to shred ‘tappy tap' style over an already strange musical brew, thus making me look very bad at guitar. The Rick Rubin of current indie punk, Will Yip, was brought in and slayed the mix, beginning what I hope to be a long relationship of being overly enthusiastic together.

Along with contributions from my wife Sherri and her sisters Stacy and Christie, we saw the return of (essentially) founding Say Anything bass player Alex Kent, a man who played on some of our most beloved work. Alex contributed to an SA record for the first time in 7 or 8 years. Bizarrely, we were even able to get guidance and bounce the songs off of the artist who had first inspired our approach, that singularly charismatic MC/Producer from South Side Chicago. Long story, but yeah. That happened.

As weirdly ​me ​as ​our work will always be, Say Anything has truly become a collective. ​I can now go on with the rest of my life knowing there is an infinite amount of things left to do with this not‐really‐a‐band. “I Don't Think It Is” has cemented in my mind that it's going to be a fun few decades before I'm too old to parade my ever‐expanding ass in front of a crowd of sweaty kids. And despite Say Anything being a one­man band, it's nice to know that I don't have to do it alone.”