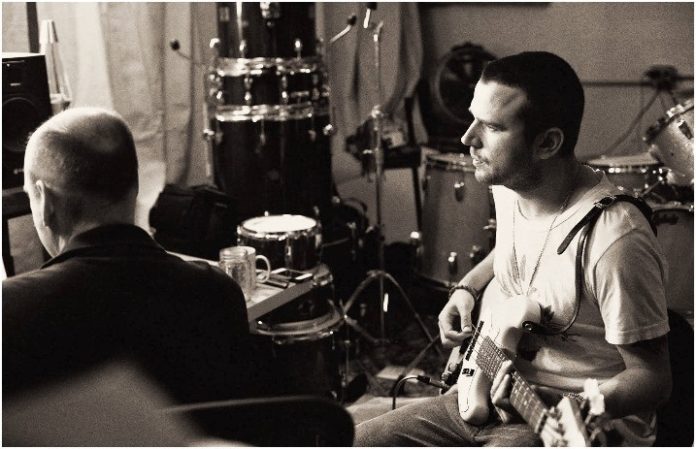 After a two-year hiatus, Say Anything mastermind Max Bemis reopened his Song Shop, where fans can have an original song written for them. Bemis started the project in 2008, offering his songwriting skill to anyone willing to pay a nominal fee. Historically, the slots have filled up quickly, forcing Bemis to shut the platform down to get to the work at hand. The Song Shop reopened late last week, with Bemis announcing that he’ll be working on a total of 800 songs before closing down once again.

WATCH: Max Bemis with some dude on a couch performing “Slumming It With Johnny.”

“It doesn’t really shut down so much as open and close every couple of years,” says Bemis about the cyclical nature of the Shop. “In particular, we’ve been closed for almost two years now because of having the nuttiest couple of years in my life: making a new record, changing labels, having a new baby boy—this week!—and touring. Surprisingly, the people who buy the songs 99 percent of the time utterly appreciate and understand how much it takes to create these songs at the volume I do. It’s flooring. I’ve written about 10,000 songs so far. So I’m kind of living in a box when it comes to other people’s viewpoints about it despite the oddball who doesn’t get that I’ve spent a huge chunk of my life alone in a room writing these songs.”

Fans have several tiered options. The first can get you a one to two-minute acoustic song written and sung by Bemis for a mere $85. Other tiers include a full-length song up to four minutes ($170); the participation of both Bemis and his wife, Sherri ($207); and a full-production track with guitar, drums, bass, keyboards and vocals for $475 (throw in another $50 for the Sherri option). Bemis also offers an option where he will write and play a song for someone’s wedding proposal ($850) via Skype. “Win the ultimate amount of points with your lover ever!” says the tagline on the shop’s website. There’s also a pretty extensive FAQ to satiate any potential emo-patrons about the process.

Bemis carefully considered a bunch of factors before restarting the project. The biggest motivational factor, if we’re being honest, is that he’s pretty damn great at what he does. “The biggest thing is that I’ve developed a weird set of compulsive songwriting skills because of writing so many songs,” he says, “which makes them go faster now then they have. This also allows me to make the songs more emotional and fun to work on, so I’m not sitting them on crack, slack-jawed trying to do something impossible. They’re a huge part of my creative process, and I credit them for knocking me into shape for the new Say Anything record. Some of these songs are certainly ‘good’ enough to be on the next Say Anything record—but won’t.” Bemis says he’s also taking most of the year off from touring to focus on “the incoming wave and the aforementioned baby.”

When asked about Say Anything’s next maneuvers, Bemis says that the next album will be issued on Dine Alone and that he’ll be working with producer Will Yip, describing the record as “a weird beast.” But for right now, he’s concentrating on being a dad and making his talent available to the people who appreciate it the most. Although the first-ever Song Shop piece he wrote was made into a B-side (“I Could Be President”) during the 2009 era of the band, he’s very cognizant about keeping the personal nature of the songs to the people who commission them. “I’ve made a weird ‘thing’ out of not using Song Shops for Say Anything,” he says. “I don’t ‘songwrite’ without a purpose, artistically or practically, so I know what project I’m writing for when I write songs. When I write each Song Shop song, I really want them to have the maximum effect on that Song Shop listener and bond with them over their struggles or love and how it relates to me.”

Hear another snippet from Bring Me The Horizon’s next album