The hand-painted guitar was used to record the band's debut album, 'Gish'.

Sometimes happy endings take a little bit longer than we hope they would, or in Billy Corgan‘s case, about three decades longer. The Smashing Pumpkins frontman was FINALLY reunited with his long-lost Gish guitar that was stolen almost 30 years ago.

In an emotional reunion, Corgan was reunited with his favorite guitar that had been stolen 27 years ago—a hand-painted Fender Stratocaster he had used when recording the band’s debut studio album Gish.

Alex Heiche, CEO of music royalty finance firm Sound Royalties, was contacted by Will Carter at Music Starts Here about a possible lead on the missing guitar. On February 5, Heiche set up at meeting between Corgan and Michigan resident Beth James, who had unknowingly been in possession of the guitar after purchasing it at a yard sale.

“While I always thought the guitar would come back to me somehow, I wasn’t sure from the pictures that this would be the time. But, I had to try. It had become a piece of me as a musician and key part of our story as a band,” Corgan tells Sound Royalties.

“I’m so grateful to Beth, Sound Royalties, Music Starts Here, and everyone else who helped make this reunion possible,” he adds. “This is awesome.”

Prior to this heartfelt reunion, Corgan had offered up to $20,000 for his missing guitar. James said she was simply happy to get the guitar back into Corgan’s hands.

Not wanting to leave James empty-handed, Sound Royalties provided her with a guitar signed by Billy Corgan.

“I never would have imagined that the yard sale guitar on my wall was worth anything, let alone being sought after by a rock legend who unwillingly lost possession of it,” says James. “Of course, I was going to do the right thing. Getting to meet Billy and seeing how excited he was, was honestly the icing on the cake.” 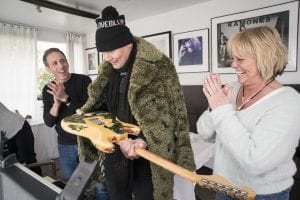 “It was an incredible feeling to see Billy’s face light up as he set his eyes on the long-lost guitar,” says Heiche. “We’re thrilled that Sound Royalties could play a role in bringing a happy ending to this remarkable story. It’s these kinds of stories that bring out the real magic in music. Turns out, we don’t just find uncollected royalties for music creatives – we find stolen guitars, too!”

We love a happy ending.