The Child is coming to vinyl.

Today is Star Wars Day and Disney is revealing a new vinyl record fans are going to be stoked to get their hands on sporting a giant image of The Child (otherwise known as Baby Yoda).

For May the 4th, Disney is offering fans the chance to get their hands on a vinyl record with The Mandalorian theme on it along with the Baby Yoda image.

The new vinyl record is aptly titled “The Child Die-Cut Vinyl”. On the record, listeners will find the theme for the series on both sides of the disc.

The picture disc’s artwork is featuring The Child in a pod gripping the metal sides while wrapped up snuggly in that brown jacket. The theme was composed by Ludwig Göransson who has also worked on film scores for Black Panther, Creed, Atlanta and more.

The vinyl comes at a hefty price for an album only containing two tracks at $24.98. It’s expected to be shipping to customers by mid-Summer 2020.

“Take The Child from the series “The Mandalorian” home in this adorable die-cut vinyl picture disc depicting the creature affectionately known as Baby Yoda. Featuring the series theme song composed and produced by Ludwig Göransson, this is a must for any Star Wars and vinyl collector,” the description reads.

You can pre-order the vinyl here and see it below. 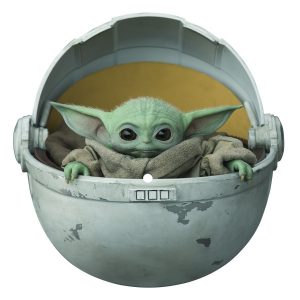 Elsewhere, Star Wars day is getting a lot better for fans who don’t own their own copies of the films. Disney+ is adding all nine films from the franchise to their service today along with the new docuseries Disney Gallery: The Mandalorian and the final episode of Star Wars: The Clone Wars.

All 9 films, all in one place. Stream the complete Skywalker Saga on May the 4th, only on #DisneyPlus. pic.twitter.com/9PCC7ICUgd

The complete Skywalker Saga, all in one place. Start streaming all 9 films, including Star Wars: The Rise of Skywalker, on May the 4th, only on #DisneyPlus. pic.twitter.com/iBpIiwY18U

Are you planning on trying to get your hands on a copy of the new Star Wars vinyl? Let us know in the comments below.