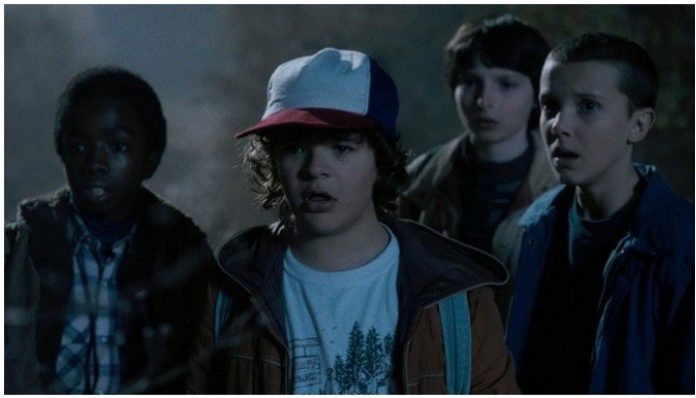 Get ready to pack your bags, we’re about to head back to Hawkins, Indiana.

In a slew of announcements posted yesterday, the cast of Netflix’s most beloved show, Stranger Things, has officially wrapped on filming season 3!

Read more: 11 ‘Stranger Things’ tattoos that will transport you to the Upside Down

David Harbour (who plays Jim Hopper), Millie Bobby Brown (who plays Eleven) and Noah Schnapp (who plays Will Byers) have announced the show’s last day of production with their new Instagram posts.

And now that we know the show’s officially wrapped with shooting, we should be expecting to see snippets of the newest season in the coming months.

As we previously reported, the show gave us a hint of the show’s official release date in a retro commercial for Starcourt Mall. The new mall is set to come “next summer,” which means that we can only assume the new season will come then.

With filming wrapped, that seems likely, and we seriously can’t wait for more Dad Steve.

Check out the posts below!

…and that’s a wrap

Wrapped. Everyone say ‘goodbye mustache.’ If you need any info on what’s good in Hawkins while I’m away, give Gary a call. He can’t keep his damn mouth shut. #spoilerswithoutcontext #awfullogos #facecaterpillar #bestjobever #fletch #speilbergeatyourheartout

as we said goodbye, i gave my best friend the biggest hug and told her i loved her so much. My sister forever @sadiesink_

Stranger Things season 3, what we know so far:

The show’s third season apparently began filming in the spring. Even though it recently started production, we have been getting some snippets of the upcoming season.

It was recently revealed in an 80’s style commercial that the show will be getting a new hang out spot for the kids and teens of Hawkins, Indiana. The new spot will be a mall called Starcourt Mall, where you’ll find the “cool kids” frequenting.

What’s more? The mall was announced to be opening in “next summer,” which means that we can only assume the new season will come then.

It was recently reported that the show is set to be “much darker” than in previous seasons. According to Producer and director Shawn Levy the show will go to some darker places than we’ve seen:

Speaking with Bad TV (apologies in advance for any translating errors) a while later, Levy shared that the show’s forthcoming season is the “most ambitious” of them all, saying:

While he didn’t give away much, Levy did share that the new season will draw some inspiration from horror directors during the ’80s, with a specific mention of Halloween creator, John Carpenter:

While we’re stoked about all of the Stranger Things’ news, the best news of all is that our favorite dad Steve Harrington (Joe Keery) is set to have a bigger role in Season 3.

“We’ll definitely get to see some more of Steve Harrington in Season 3, and I’ll just say we won’t be abandoning the Dad Steve magic. I don’t want to say much more, but I literally feel that we were walking along and we stumbled onto a gold mine with Dad Steve,” Levy says.

Additionally, a report from Screen Rant found that Netflix and Century Books have partnered up to officially release the world’s first Stranger Things companion guide of the show called “Worlds Turned Upside Down.”

In this companion, the show’s third season is teased, and it promises that one tentacled monster will be returning to haunt the kids of Hawkins, Indiana once more: The Mind Flayer, the monster that came for, and possessed, Will’s body in season two of the show.

“The Mind Flayer hasn’t lost interest in Hawkins either. The tentacled creature continues to loom near Hawkins inside the Upside Down, and its malevolent influence isn’t absent from the new season,” the book reads. (via ScreenRant)