Shortly after Black and Simms announced their Cincinnati show, Circa Survive announced they were rerouting to Cleveland for a set at the Phantasy the same day, July 13.

Read more: ‘American Horror Story’ takes it back to 1984 with cast reveal teaser

The band shared the update to social media with a ticket link. At this time no openers have been announced but tickets are on sale for $20 advance and $23 at the door.

The promoter, BravoArtist, shared in the Facebook event that it’s due to the festival’s cancellation and that a limited amount of tickets are available. Check out remaining tickets here.

LAKEWOOD, OHIO! We have a new show at Phantasy this Saturday, July 13th. Spread the word!! Tickets are on sale now! https://t.co/uhD73gXa85 pic.twitter.com/8el1JkCdlF

A few hours later, Sum 41 followed suit with a show in Columbus at the Newport Music Hall.

“The @Rockstardisrupt date in Thornville, OH on Sat 7/13 has been canceled,” the band tweeted. “But we’re not taking the day off. We want to play! We’ve just added a show at Newport Music Hall in Columbus on Sat 7/13. Tickets go on sale today at 5pm et.”

The @Rockstardisrupt date in Thornville, OH on Sat 7/13 has been canceled – but we're not taking the day off. We want to play! We've just added a show at Newport Music Hall in Columbus on Sat 7/13.

Like Circa Survice, Sum 41 haven’t revealed any openers at this time. However, Disrupt Fest tourmate, Sleeping With Sirens frontman Kellin Quinn, replied to the post with “We’re in.” So either Columbus is getting an epic pop-up with Sum 41 and SWS, or Quinn will be rocking out with the rest of us. Tickets are on sale here.

Check out the full list of pop-up shows below, which all take place this Saturday, July 13.

Yesterday, the event’s ticketing host, Front Gate Tickets, began issuing refunds for the July 13 stop and sent out emails concerning the event cancellation. The site stated it was “due to logistical reasons,” but did not offer much more information. You can read the statement in full below as well as a screenshot of the email from the Facebook event page.

“Due to logistical reasons, Rockstar Disrupt Festival set for July 13th at Legend Valley in Thornville, OH has been canceled.

Front Gate Tickets will be issuing refunds to all fans who purchased a ticket. The refund will be credited to the original method of payment used at the time of purchase. Refunds will be processed on, or before, Friday, July 12th. Please allow 7-10 days after processing for the refund to be reflected on your statement.” 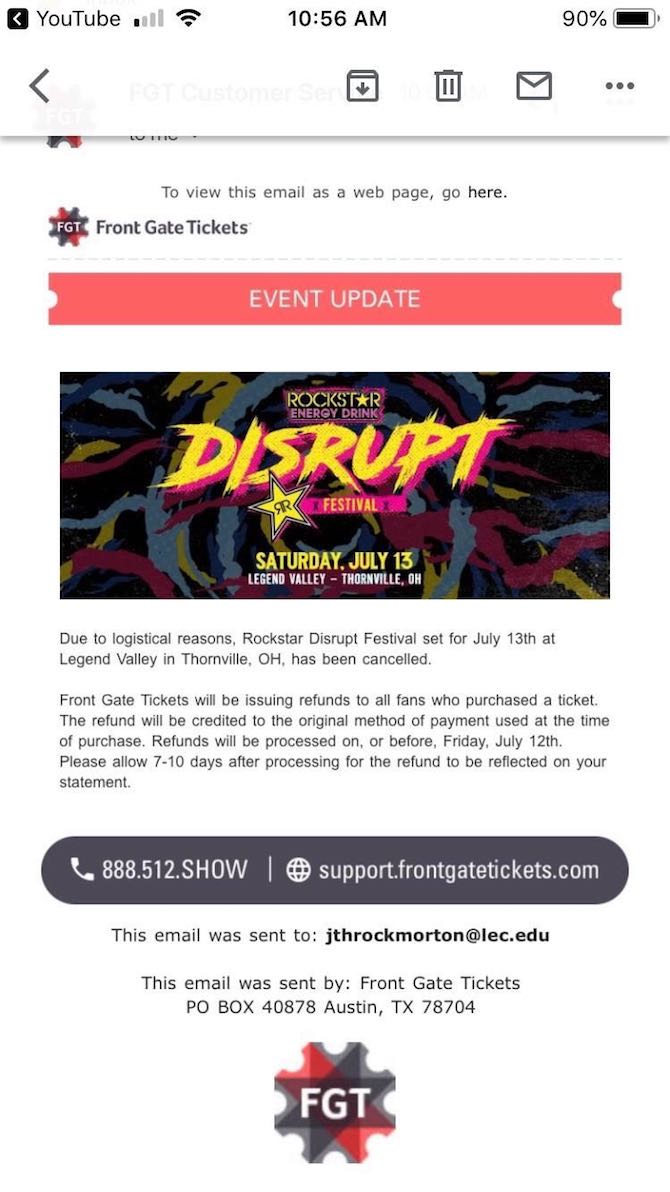 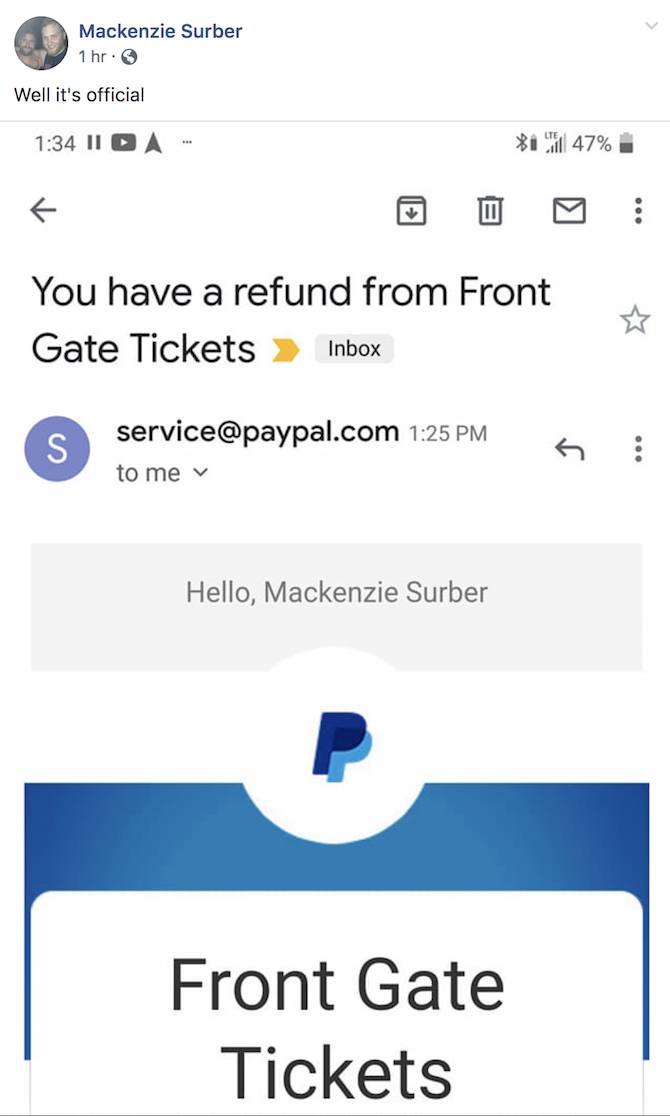 The festival has several bands rotating throughout its run. The Columbus stop was to feature performances from Thrice, Sum 41, Circa Survive, the Used, Atreyu, Sleeping With Sirens, Andy Black, Four Year Strong, Memphis May Fire, Trophy Eyes, Juliet Simms and Hyro The Hero.

Atreyu shared this week’s upcoming dates, and many noticed they left out the Columbus stop on the 13th.

At this time, the festival hasn’t commented on the cancellation and the only confirmation comes from Front Gate Tickets.

Three days ago, a thread appeared on Reddit’s r/poppunkers discussing a rumor that the date was going to get canceled. The original poster cited low turnout at many of the other dates that had already taken place.

“Rumor that Disrupt Fest in Columbus, Ohio on 7/13 is going to be canceled. [Has] a traveling festival like this ever flopped as bad as this one has before? I know this wasn’t exactly the best line up, but yikes even I’m surprised just how terrible the crowds for it are.”

User makearunforitx stated, “I still haven’t heard a single good thing about this festival” While user PopPunkTeacher pointed out, “I mean, between warped events and sad summer fest (which has a much better lineup imo). Only so much money to go around.”

Yesterday afternoon, fans took to the Columbus event page to follow up on the rumors of the cancellation, with one user asking, “Hearing from multiple people that this date is getting canceled. Can we get an official update?!”

Fans noticed the date was removed from the website, and the cancellation emails followed shortly after. The Columbus cancellation follows Disrupt Festival moving the July 3 Toronto date from Budweiser Stage to a smaller venue, RBC Echo Stage, days prior. The change upset many fans who paid for higher tier tickets.

Disrupt Fest just changed Toronto's venue from an arena to a GA outdoor stage. Meaning that people who paid 20 bucks for cheap lawns have the same access as people who paid for seats? And GA is now 50 bucks?? This festival is a whole mess.

Several days later, Circa Survive revealed the Bristow, Virginia stop July 9 was canceled days ahead. Neither the band nor festival gave any reason for the cancellation.

BRISTOW, VA – The Rockstar Energy DISRUPT Festival at Jiffy Lube Live on July 9, 2019 has been cancelled. Refunds are available at the point of purchase. Visit https://t.co/tRiTvZNDrT for info.

Disrupt Festival has a handful of remaining dates below with ticketing information here.