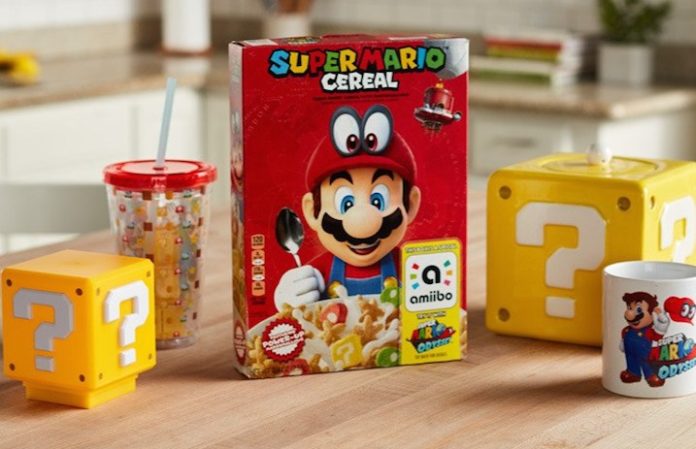 Get ready to start your day with a delicious level-up: Nintendo is releasing a limited edition Super Mario Cereal just in time for the holidays! The breakfast collab from the video game maker and Kellogg's rolls out Dec. 11.

Read more: Everything is awesome in this Lego-themed restaurant

According to a press release from Nintendo Of America, not only will each Super Mario Cereal box feature collectible Super Mario Odyssey art, it'll also double as an Amiibo accessory. That's right, when you're playing Super Mario Odyssey, you can tap the cereal box with your Nintendo Switch—just like you would with an Amiibo—to get gold coins or a heart in the game. Fun!

“This powered-up partnership with Kellogg's is another exciting way for us to expand the Nintendo brand in unique and creative ways,” says Nintendo's Tom Prata. “We are always looking for new opportunities to bring smiles to people of all ages, and this is a fun way to kick off the day.”

The cereal itself looks like a Mushroom Kingdom melange of sweet breakfast stuffs; it's being called a “Super Mario twist, with colorful power-up marshmallows and a blast of mixed berry flavor in every box.”

Kellogg's already has MarioKart fruit-flavored snacks, so, hey, why not cereal? Check out Nintendo's Super Mario Cereal announcement on Twitter here, where you can view some additional images of the cereal box art:

We can cerealously confirm that Kellogg’s Super Mario Cereal will be hitting store shelves on Dec. 11th! https://t.co/bYlPaVjvFc pic.twitter.com/cbqCLeUulg