Just days after revealing the official synopsis for season 2 alongside some new photos, The Umbrella Academy is up to something again.

On Tuesday, we got the first official photos revealing where (and when) the cast ended up along with the debut of some new characters. Now, the Netflix series’ account is teasing something else that many fans believe could be a trailer.

At the end of May, The Umbrella Academy’s social media accounts shared a short clip alongside the caption “Have you seen the Hargreeves? time travel composites coming tomorrow…” The following day, we got another set of posters of everyone’s favorite dysfunctional family.

Now, instead of “time travel composites,” TUA is teasing they’re “experiencing some technical difficulties.” Along with the caption, there’s an image of a static-filled TV that looks in line with season 2’s ’60s setting that reads, “What the hell did we do now?”

Read more: See where the Hargreeves landed in new ‘The Umbrella Academy’ photos

Read more: 15 items you need to enroll at ‘The Umbrella Academy’ before season 2

Justin Min, who portrays Ben Hargreeves a.k.a. Number Six, also chimed in with an appropriate GIF of Bella Hadid.

Fans immediately started speculating (and hoping) for the trailer for the second season. Channeling their inner Allison Hargreeves, one user tweeted, “I heard a rumor your [sic] going to finally drop the S2 trailer” to which the account stated, “uhhh rumors are so last season.”

uhhh rumors are so last season

The Umbrella Academy offered a bit more clarity on what the teaser did (or rather did not) mean on Instagram.

One user commented, “don’t be shy, post more,” to which the account stated, “ok!!! (pls hold a lil longer for trailer but we promise you goods in the meantime)” 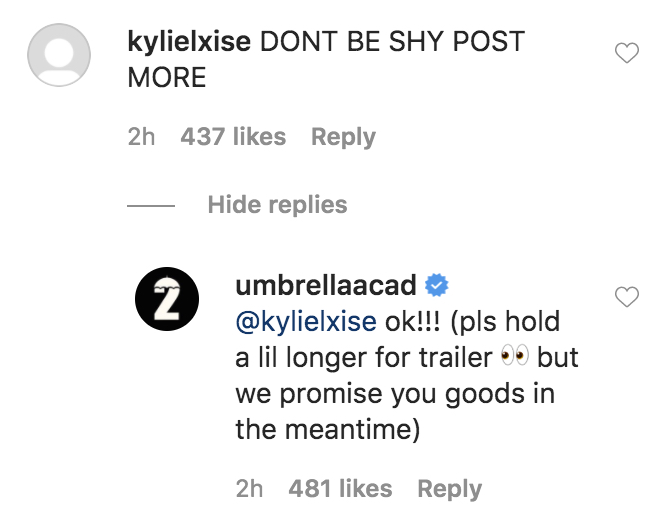 Another use straight-up asked for a trailer, and the account repeated a similar response with “not quite yet but we got some stuff in our briefcase until it’s ready.” 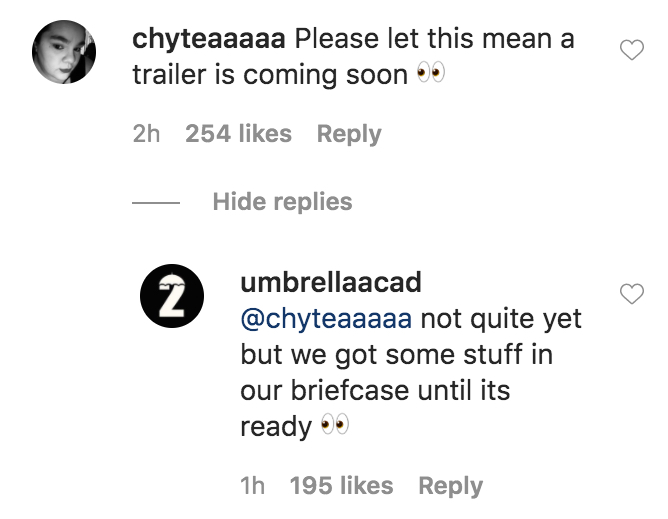 A few hours after the initial tease, The Umbrella Academy posted a GIF of Min as Ben.

While it appears that this might not be a trailer on the way, TUA definitely has plenty of surprises left.

Season 1 encompassed much of Gerard Way and Gabriel Bá’s volume 1, Apocalypse Suite, and season 2 drops the Hargreeves off in the namesake of volume 2, Dallas.

In addition to tracking down the Hargreeves siblings in the 1960s, season 2 will usher in a new cast of characters. In September, we were introduced to three non-comic additions: Texas housewife Sissy (Marin Ireland), Lila (Ritu Arya) and Raymond (Yusuf Gatewood). The new synopsis also teases “a trio of ruthless Swedish assassins” portrayed by Tom Sinclair, Kris Holden-Ried and Jason Bryden.

Read more: Gerard Way is working on ‘The Umbrella Academy’ comic’s next volume

All 10 episodes of season 2 hit Netflix on July 31. You can see the official synopsis below and new photos here.

Five warned his family (so, so many times) that using his powers to escape from Vanya’s 2019 apocalypse was risky. Well, he was right—the time jump scatters the siblings in time in and around Dallas, Texas. Over a three year period. Starting in 1960. Some, having been stuck in the past for years, have built lives and moved on, certain they’re the only ones who survived. Five is the last to land, smack dab in the middle of a nuclear doomsday, which—spoiler alert!—turns out is a result of the group’s disruption of the timeline (déjà vu, anyone?). Now the Umbrella Academy must find a way to reunite, figure out what caused doomsday, put a stop to it, and return to the present timeline to stop that other apocalypse. All while being hunted by a trio of ruthless Swedish assassins. But seriously, no pressure or anything.