Most listeners know Tilian Pearson from his vocal charms shipping against Dance Gavin Dance’s post-everything metallic madness. On his third solo album, The Skeptic, he’s equally urban and urbane, armed with a pop sensibility JT couldn’t convey, but with enough character to reconcile both his fans and DGD diehards. Ask him about his favorite music, and he’ll probably say, “yes.”

Read more: We put Dance Gavin Dance on the spot

Not surprisingly, Pearson’s pop proclivities are informed by the same mindset that powers DGD, as well as the spirited worldview he came up through. He reveals everything from the key influence in his life (Spoiler alert: He’s not leaving milk and cookies near the fireplace come Dec. 24); how making music is equal parts creativity and scientific theory; the time he broke down after seeing the final edit of the video for “Hold On” (a track he describes as “an unconditional love song”); and the hardest thing about being in solo-artist mode.

“Dance Gavin Dance operate with a lot more experience,” he says when contrasting his role as a solo artist to DGD. “It’s a lot easier to tour with Dance Gavin Dance, and a lot of the stress is taken off me and put on other people. Touring solo, I definitely shoulder a lot more stress, but it feels just as fulfilling in the end.”

He also reminds fans that being his own captain doesn’t affect DGD in the slightest, almost bristling when people somehow perceive his solo work as “competition” against his bandmates.

“People would ask me sometimes at [my] solo shows, ‘How are you ever going to step out of the shadow of Dance Gavin Dance?’ And I’m like, ‘Why would I ever want to do that?’ It’s the perfect project for me. I would never want to lose the incredible energy that’s there.”

Whatever you think of him—sophistication blueprint, musical polymath, quality hang or dream date—Tilian Pearson fits all those roles. Order the new issue here and get caught up in all his posi vibes and righteousness. 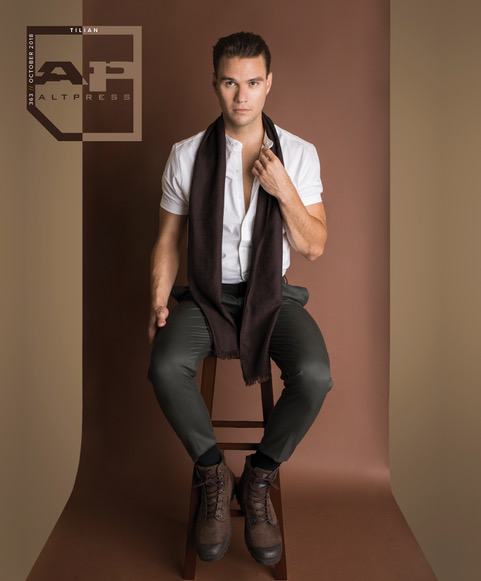 ALSO IN THIS ISSUE

Two years ago, the celebrated U.K. metal act were wracked with grief after the death of their co-founder. Instead of throwing in the towel, they threw down hard with some of the most passionate tracks they’ve ever written. Listen up, because it doesn’t get any realer than this.

I DONT KNOW HOW BUT THEY FOUND ME

Sure, you’ve heard Dallon Weekes and Ryan Seaman in their previous roles in Panic! At The Disco and Falling In Reverse. As IDKhow, they’re conjuring a sonic sorcery of their own design, one stacked vocal harmony (and kiss) at a time.

SPECIAL: THE SONGS THAT SAVED OUR LIVES

It’s very popular for fans to credit their favorite bands for “saving” them through the power of a song. Hopeless Records and Sub City will release Songs That Saved My Life—a compilation aimed at spreading awareness about and raising money for suicide prevention and mental health—on Nov. 9, which inspired us to ask the question of more artists. In this special, ANDY BLACK, FRANK IERO, WATERPARKS, SET IT OFF, DAN CAMPBELL (the Wonder Years/Aaron West And The Roaring Twenties), TAKING BACK SUNDAY and other artists recall the songs that made them want to pay the inspiration forward.

This month’s 10 TOPICS finds LAURA JANE GRACE of THE DEVOURING MOTHERS and AGAINST ME! being fiscally responsible and always traveling mindful. Welcome to the house that punk built—with the option of really nice pillows.

THE BOULET BROTHERS’ life trajectory from rebellious, mixed-up youths to iridescent cultural fulcrum—as creators of the reality show Dragula—is the kind of story we need to celebrate, cultivate and elevate to the world. They are living proof that IT GOT BETTER.

The three-headed Australian pop-rock delegation STAND ATLANTIC hope to make the biggest splash possible on their American debut LP. We get the story on their debut release Skinny Dipping in ALBUM ANATOMY.

In this issue’s AP ARCHIVES, we remember the times when HEAD AUTOMATICA went to the dogs, SYSTEM OF A DOWN got down to business and CHIODOS got framed. Our 10 ESSENTIAL picks list haunted-house howl-raisers for your Halloween hair raising, while we discover some of the most exciting photos and beautiful fan art from all parts of the globe.