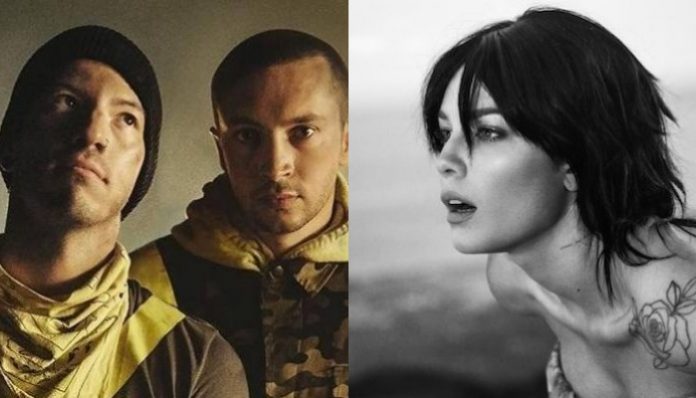 Twenty one pilots are possibly gearing up to drop a collab with one of our favorite pop queens ever — Halsey.

The speculation comes because a new song was added to the band’s discography on BMI repertoire, a music royalty and licensing site.

The website is responsible for bringing fans song titles “Jumpsuit” and “Nico And The Niners” long before they dropped.

A song titled ‘Emotional Arsonist’ has been added to @twentyonepilots’ BMI Repertoire. The new song is a supposed feature with @halsey. You may or may not remember but this same site have us the titles ‘Jumpsuit’ and ‘Nico and the Niners’ long before their release. 👀 pic.twitter.com/zs6u1gc8C6

This is definitely no solid proof, but we can only hope it means a collab track is coming sooner than later.

twenty one pilots may still be touring in support of last year’s smash-hit record Trench, but their prior releases are still getting love years after release.

The duo’s third studio album, Vessel, must still be on repeat for fans over six years later, now reaching a rare RIAA milestone.

Recently the final track of Vessel, “Truce,” was Gold certified. With that honor, the album’s entirety has been dubbed Gold or Platinum.

This was all part of the plan for fans, who schemed to push the two into the record books back in February.

A group of Redditors started the Fake You Out Project a few months back to urge others into promoting the song.

If we get Fake You Out enough streams we can make it Gold certified and make Twenty One Pilots the first band in history with two albums every single song gold certified! LETS GO!!! from r/twentyonepilots

The project was obviously a success. Not only is this a tremendous honor for the duo, but it’s also a record-breaking one.

Along with every track from 2015’s Blurryface, Vessel‘s certification makes twenty one pilots the first group or artist to have every song from two separate albums certified gold or silver.

Blurryface had already set records of its own after its release, becoming the first album from this era to have every track go gold or platinum.

As for Halsey, she recently just clapped back after someone accused her of using the LGBTQ community as a marketing strategy.

The openly bisexual artist recently posted photos on social media from a show in Brazil. In some, she’s shown holding a Pride flag.

In the comments, someone decided to write “rainbow is the new marketing strategy”. Halsey wasn’t going to let it slide without responding.

“There’s been a flag in my show for 5 years. You’re just not paying attention you whiny little baby,” she said.

Many fans in the comments defended the singer, who is very outspoken about her love for the LGBTQ community.

Read more: ‘Rick And Morty’ season 5 is already in the works ahead of season 4 drop

Last month, she performed in Camden and gave an empowering speech about LGBTQ Pride and bigotry.

For background, at the time, two women were recently beatenin a homophobic attack on a London bus that garnered a lot of attention online.

Also, because it was Pride month, and some people in Boston are pushing for a “straight pride” parade, causing major outcry.

At the show in the city, Halsey wore a shirt with the two women’s faces on it. It also read “Fuck your straight pride” on the back.

tonight in camden @halsey wore a shirt with that picture of melania and chris after their assault and a message that said “fuck your straight pride”. it made me fucking cry and i’m very thankful for her. pic.twitter.com/sbZTR1gKgd

She then gave a passionate speech, slamming straight pride and homophobia.

“After the Pride parades are over and after the bars close their Pride nights and the glitter is being swept out of the streets, a lot of people get on those trains and they get on those buses and try to wash the rainbows off their bodies and they’re peeling the stickers off their close because when Pride is over, it’s not safe to be gay anymore because they’re worried that someone is going to viciously assault them or viciously attack them. So when the people around the world ask the question, “Why isn’t there a straight pride parade? The answer because if there was one, you wouldn’t have to get on the bus and be terrified of being fucking beaten or killed afterwards. That’s why there’s not a straight pride parade because every fucking day on public transport is a straight pride parade.”

She then led the room in a powerful chant of “I will not be afraid.”

The entire moment is extremely moving, and was caught by fans at the show. You can her full speech below.

Halsey getting a room full of queer kids to scream “I WILL NOT BE AFRAID” after two women were beaten for being gay in the exact same town she’s performing in. She’s wearing a shirt with their faces on the front, and “FUCK YOUR STRAIGHT PRIDE” on the back. pic.twitter.com/VssWprS3gX

Are you excited for this possible collab between twenty one pilots and Halsey? Sound off in the comments down below!