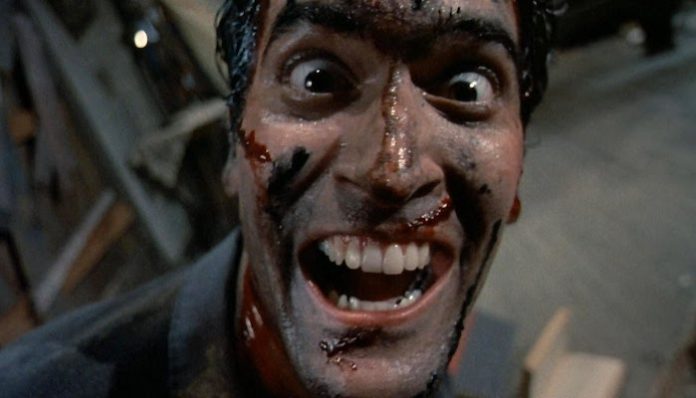 If you’ve ever stayed in a log cabin, you know how absolutely heart-wrenchingly creepy they can be.

While they seem like an idyllic location for getting some good, old-fashioned R&R, they can actually be rife with terrifying happenings, too. The kind that make you wish you had splurged on a fancy hotel room somewhere instead.

Marvel and DC Comics writer Tom Taylor took to Twitter with a particularly spooky tale of his time spent in a log cabin in the Australian outback. Taylor had planned on getting some precious writing time in during his stay at the cabin, given the fact that he’s working on several comic-related projects at once. What happened after that was straight out of a horror movie – particularly, Evil Dead, as we were thinking.

So, hey.
I somehow managed to book a creepy log cabin to do some intensive writing in for a few days…

I’ve been laughing to myself about just how cliched-horror-movie this cabin is. But at 5.30am, out of nowhere, despite it blowing a gale out there for hours, wind chimes start chiming for the first time from the porch…

When Taylor got to the log cabin, things started off on the wrong foot, it seemed, with wind chimes tinkling in the air out of nowhere. Okay, not too bad starting off, right? But then he goes to take them off the hook, and the door slams shut behind him. Typical.

Read more: The top 10 horror movie remakes from ‘Evil Dead’ to ‘The Grudge’

And I see the wind chimes hanging on a rusty hook. I figure I can reach them, and I walk out onto the porch in my socks.
And the door immediately slams shut behind me. Of course…

He finally manages to get the chimes off their hook, but more creepy noises start up out of nowhere, and to be honest, we’re not sure how he continued to stand it when the door slammed shut. We would have been out of there at that point.

Now I’m kind of giggling to myself because of how creeped out I’m feeling, so I grab my phone to take a photo of the murder cabin I’m writing in for a few days. Here it is… pic.twitter.com/M6iFVSJofI

But those are nothing compared to the creepy noise his ceiling began to make when he finally got in bed to go to sleep for the night.

I’m lying in bed, and the ceiling is making this sound… and then my phone dies… pic.twitter.com/wU7NHvXoCz

Taylor even had a particularly harrowing encounter with a “man at the door.” It turned out to be someone with a package, but still. You wouldn’t have opened up the door either, admit it.

After the night I’ve had l, there’s no way I’m opening the door to a stranger delivering a package to a remote cabin…
Also, I’m in my underwear.
Also, I can’t open the door because I frantically locked it during the night and I have no idea what I’ve done with the keys…

So, what are we thinking?
Still-beating heart or trapped soul? pic.twitter.com/SxOOnVNkxe

Even with a relatively benign ending to his story, Taylor is still at the log cabin for the next few days – and we’re honestly scared for him. Would you spend multiple nights in a strange little cabin like this one? Let us know in the comments below, and follow Taylor’s adventures in the cabin at the full thread here.

10 musicians’ posts that prove Vine was the best thing on...