Let’s talk about real conspiracy theories. Why is it that in decades of pop culture, anything considered intelligent or elevated is considered suspect? If you’re smart and you know the right answer in any classroom discussion, you’re a nerd. The jocks and the cool dudes always got the honeys, while the dorks got more Magic: The Gathering collectors cards. While the hyper-intelligent, socially awkward among us have some pop-culture heroes, it’s time to bring that action into music. Behold our list of geek-rock bands that are living proof that being an awkward nerd is punk AF.

The simple truth is not everybody can rock a 10-inch, bright red mohawk and a spiked leather jacket. Whether it’s irrational fear of the color red or potentially stabbing yourself putting the jacket on, some peeps simply can’t hang. But that doesn’t mean they don’t have the rock jones buried deep inside them waiting to be released. Thus, the geek-rock contingent has gotten by from playing up their discomfort and turning up their guitars.

This APTV rundown features iconic suspects who can still sell out clubs and theaters (back when we still had that entertainment option). One of these bands were embraced early on by the punks, despite said outfit actually having the temerity to rock a synthesizer onstage. There’s an group who use a toy, cat-shaped keyboard, an instrument we haven’t seen on a stage in years. And we all know about the kings of the genre who had big radio hits and then followed it up with a sophomore release considered more precious than a Tolkien ring.

So we double-down on our asthma inhalers in tribute to these geek-rock warriors. They’ve created enduring soundtracks out of everything from unraveled sweaters to canaries in the alley by light switches. This nerd nation will continue to rise. After all, they’re the people who troubleshoot your computer and your phone, and design wild video games. And the comic books you adore. Just sayin’… 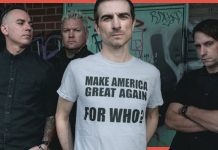