It’s official: American Horror Story regular Evan Peters is back for season 10 this fall. After taking a year off due to “a full-on burnout” before 1984, we discovered last month that he would be returning this year along with original star Sarah Paulson.

While we’re all working from home under quarantine (Apocalypse saw this all coming, right?), now seems like the best time to binge through this beloved anthology show on Netflix and dig out all the gems brought to us so far by the OG Evan.

Cult’s weirdest turn (believe us, there were a few of them) was Peters’ portrayal of Jesus Christ… Yeah, it’s as strange as it sounds. He descends from heaven to give cult leader Jim Jones a high-five, but that’s about it.

In the physical stakes, Peters fits the bill, and shooting this scene must have been an interesting experience. But there’s nothing much left to say about this obscure appearance that probably should’ve ended up on the cutting room floor. 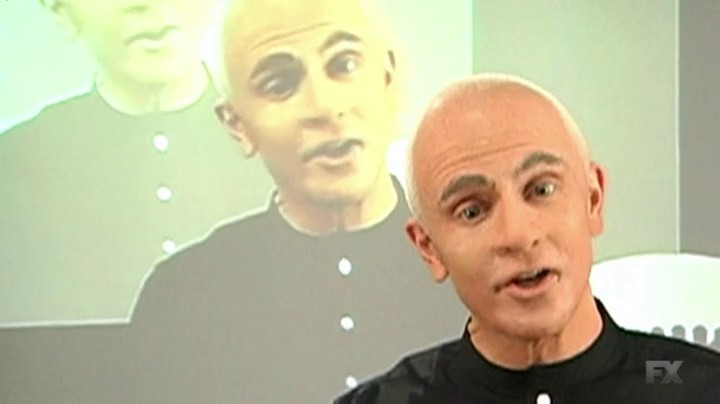 At first, we didn’t realize that was Peters. Thanks to the wonders of a bald cap and AHS’ extensive effects team, the Heaven’s Gate leader opens the Cult episode “Drink The Kool-Aid” with a small, somewhat uneventful part justifying Kai’s behavior.

He’s not as menacing as Jim Jones, and he’s not as sickening as Charles Manson, but Applewhite’s actions and his wide-eyed pitch-black stare would be enough to put us off. 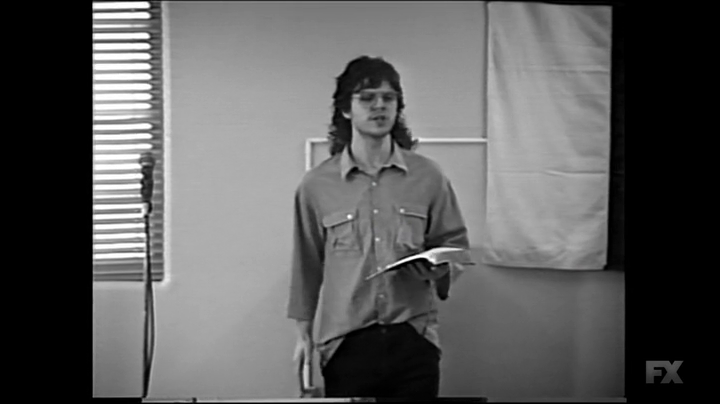 Blink and you’ll miss Branch Davidians leader David Koresh’s scenes in Cult’s “Drink The Kool-Aid.” You’d also be forgiven for forgetting he was even there thanks to his brief screen time.

One of the lesser-known cultists brought up in the seventh season’s explanations of Kai’s claim to power, Koresh’s stint wasn’t exactly huge. But Peters impersonated his accent perfectly and totally looked the part with his trademark massive glasses and a curly wig. 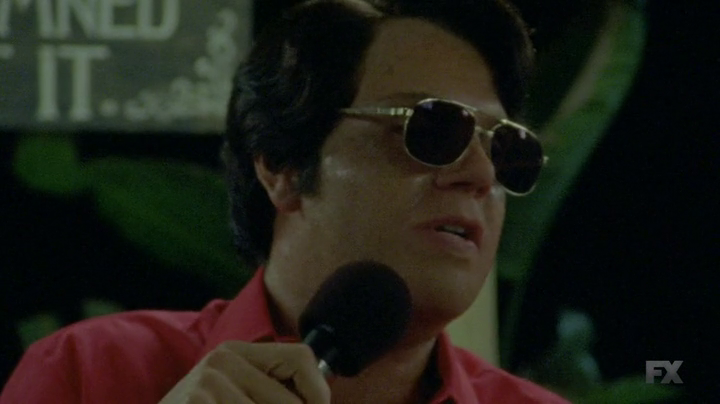 For those interested in true crime, Peters’ portrayal of the Peoples Temple cult leader Jim Jones is eerily accurate. His mannerisms, dialect and even the way he sits in his makeshift throne shows there’s serious attention to detail in Peters’ performance based on the surviving footage of the infamous preacher through Cult episode “Drink The Kool-Aid.”

Another of Peters’ terrifyingly realistic roles was a brief stint as Charles Manson in the aptly named season 7 episode “Charles (Manson) In Charge.” Appearing as a fevered hallucination to Kai Anderson as a means of justifying his past actions and guiding his future choices, Peters impressively embodies the hyperactive Manson Family cult leader as if he really resides in Kai’s mind.

He even pulled off Manson’s trademark creepy, wide-eyed glare while staring at Kai…or himself. Evan vs. Evan, anyone?

Peters’ resemblance to the artist Andy Warhol is uncanny in Cult episode “Valerie Solanas Died For Your Sins: Scumbag.” Another of his short-lived AHS roles, his inclusion in the seventh season and the portrayal of Valerie Solanas’ attempted murder of the iconic artist brings about a huge debate on female equality that runs throughout the season.

Thanks to Peters’ sassy delivery of the role and pulling off that white hairdo, Warhol’s scenes make a surprisingly lasting effect on the season’s story despite his limited screen time.

Roanoke would’ve been far more painful if it weren’t for the light entertainment of Peters’ cheerful character Rory Monahan. With the actor reenacting the role of aristocrat Edward Philippe Mott, his bubbly personality steals the show for the brief time he appears on screen.

Monahan’s hopes of becoming a successful actor post-My Roanoke Nightmare are tragically dashed at the hands of the slaughtering nurses in the house before he gets to screen test with Brad Pitt. #TooSoon

Coked-up Kineros Robotics brainiac Jeff Pfister from Apocalypse may be one of Peters’ most underrated roles. Pfister is a complex albeit immature nerd who becomes incredibly well connected in the Illuminati, later known as the Cooperative.

He sold his soul to Satan, built a robot Ms. Mead almost identical to the original and played a massive role in initiating the end of the world… We wouldn’t want to argue with him.

Peters’ primary role in Roanoke was Edward Philippe Mott, the art-obsessed English owner of the Roanoke house who lasted all of two days in the cursed property before the strange goings-on threatened his life. A spoiled aristocrat, the exquisitely dressed Mott met his fiery end at the hands of the Butcher and her clan.

Sure, Mott wasn’t the most long-lasting character, but his story came in handy to explain the insanity behind the crimes of descendant Dandy Mott in Freak Show.

The overtly camp hairdresser/resident of Outpost 3 at the beginning of Apocalypse brought us some hilarious Peters moments, including that kinky arrival at his grandmother’s dinner party and a steamy encounter or two with the Rubber Man.

Providing some much-needed comic relief (and a weakness for men in head-to-toe leather) while the world suffered nuclear winter above ground, we have to forgive Gallant for killing his beloved nana while she was dressed as the Rubber Man… Who honestly saw that coming, anyway?

Coven’s very own zombie frat boy Kyle Spencer gave us false hope from the start—finally, a down-to-earth Peters role in AHS. That is, until he is tragically killed in a bus crash after saving Madison Montgomery from an attack. The witches piece him back together using body parts from his fellow frat brothers to create a Frankenstein character.

After a long and sometimes frustrating struggle to regain his humanity, the adorable Spencer strengthens through traumatic experiences and challenges. Each scene is a testament to Peters’ versatility as an actor.

Another of Peters’ lovable roles comes in the form of Asylum’s Kit Walker, who really can’t seem to catch a break. After being abducted by aliens, he’s imprisoned for his wife’s brutal murder. On top of everything, he’s slammed into Briarcliff as a suspect for Bloody Face’s killings.

Walker’s unlucky streak didn’t end as soon as he left the asylum. But he did maintain his innocence throughout and remains the glimmer of hope across the bleak season. AHS left his story open-ended as he’s abducted by aliens once more, perhaps for experimentation, and is never seen again.

True to his name, Jimmy Darling was the claw-handed sweetheart of Freak Show. Darling becomes the charming star who would do anything to protect his freak show family. This ultimately leads him to be haunted by his killing of a police officer to save the twins.

Darling’s character grounded the fourth season. We cried when his lobster hands were amputated, then cried again when he received prosthetic hands like his old ones. Also, his rendition of Nirvana’s “Come As You Are” goes down in iconic AHS history.

Cheeto-faced Kai Anderson was a masterpiece for Peters. A role that could well have been the cause of his burnout that cost AHS one of their main stars through 1984, the unhinged leader was a character that only Peters could pull off.

The Divine Ruler, an extremist Trump supporter with a penchant for total control, internet censorship and keeping his dead parents’ decomposing bodies in a bedroom, was an amalgamation of numerous case studies of radicalized cult leaders that held the seventh season together. Without Anderson’s inimitable breed of unstoppable, woman-loathing insanity, there would be no Cult.

Cast your mind back to where it all began in the Murder House and you’ll find tormented resident Tate Langdon. A character based on the Columbine school shooters, Langdon took messed up to a whole new level—starting the AHS tradition of the Rubber Man, setting fire to his mother Constance’s boyfriend, being somewhat responsible for the deaths of Ben and Vivien Harmon, fathering the Antichrist and many more we won’t mention here.

However misguided, Langdon was a compelling character and an AHS icon who drew us in from the beginning all the way through to his brief return in Apocalypse.

Our favorite sadistic hotelier tops the charts of Peters’ best roles. The suave star of Hotel, James March and his pencil mustache brought a ’20s opulence and an infectious love-hate character to the season that proved exactly why Peters is so beloved by AHS fans.

He surely doesn’t show any mercy when it comes to the Hotel Cortez’s customers. However, he makes up for it with bundles of class in his slick pinstripe suit and cravat. Practically owning the fifth season, March also made a brief yet lovable reappearance in Apocalypse playing an eternal card game with Queenie.