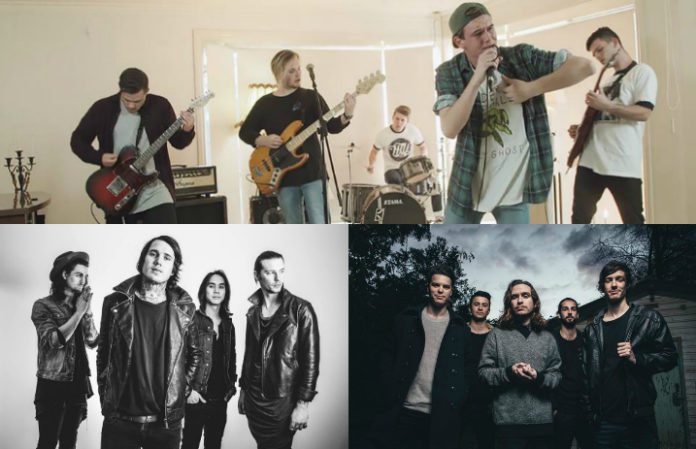 Sun, surf, wildlife that could kill you—what’s not to love about Australia? Chances are you’ve already heard of some of its more famous acts such as AC/DC, INXS, Tame Impala, and 5 Seconds of Summer. But there’s plenty more musical talent down under than what we’ve already heard. So defo check out this list of some of the best underground Aussie bands:

Five-piece rockers Ambleside are dominating the Australian melodic hardcore scene, and have gained heaps of acclaim over the past year-and-a-half for their emotional sound and dynamic vocals. Recently, they finished their first headlining tour with fellow Adelaide natives Hindsight and Sleep Talk, in support of their sophomore EP Shape Me.

For fans of: Silverstein, Being As An Ocean

The product of five best friends with a staggering devotion for music, Belle Haven describe their image as “a constantly evolving art form.” Interested in the balance between studio and live performance, they have opened for bands such as Atreyu and Cane Hill and released their first full-length, Everything Ablaze, last year.

Check out: “The Carving Knife”

For fans of: Northlane, Norma Jean

Pop-punk band Between You & Me have been making strides since the release of their debut EP Paper Thin just weeks ago. The quintet just finished supporting their big brothers With Confidence on their Better Weather Australian Tour, and previously supported Buffalo-based band Cute Is What We Aim For on one of the Melbourne stops of their 10-year anniversary tour.

Check out: “Trees In The Winter”

For fans of: With Confidence, ROAM

After being in and out of the studio for nearly the past year-and-a-half, powerhouse band Foxblood was at long last able to drop their long-awaited debut album The Devil, The Dark & The Rain last month. The album is chock-full of melodic choruses and sick breakdowns, covering a large range of genres and setting the bar high for their future musical endeavors.

Check out: “No Heroes”

For fans of: Capture The Crown, Buried In Verona

It seems the sky’s the limit for rock ‘n’ rollers Maefire, whose first single “Alysha” earned them a sold-out show at The Workers Club in Geelong. Since then, the band has reached international airplay and has played alongside the likes of As It Is, the Maine and various local Australian acts.

For fans of: The Neighborhood, the Maine

Our Past Days have had quite the tumultuous year, fighting off a potential breakup in the midst of several lineup changes. However, that hasn’t stopped them from touring with pop-punk aces the Wonder Years or signing with Greyscale Records, which led them to the release of their debut album Keep Safe.

Heavy hitters Pridelands strive for a polished and concentrated sound, stepping up to the plate to play hard with other acts in the metalcore genre. Their latest single debuted at No. 1 on the Triple J Unearthed metal charts and No. 4 overall, and their guitarist, Liam Fowler, is currently showing his charitable side by helping to build toilets in a small town in Nepal.

For fans of: Being As An Ocean, I Killed The Prom Queen

Initially starting out by playing acoustic tracks, Stuck Out has gathered a significant fan following over the course of a year-and-a-half in their native Melbourne scene. They bring high intensity to an already upbeat genre, prominently heard on their latest release, a three-track EP entitled What We’ve Come To Be.

Very rarely does one come across a band that hits as heavy and magnificently as the Beautiful Monument. Boasting an arsenal of genuinely memorable songs and strong, energetic stage presence, these ladies are ready to take on the world with the release of their latest track, “Disorder.”

For fans of: Conquer Divide, Paramore

Unapologetic and often partially nude, mathcore mavericks Totally Unicorn are anything but your run-of-the-mill band. Notorious for their tremendous energy, daring outfits, and unpredictable stage antics, their unique edge has landed them opportunities to open for bands like La Dispute, Tonight Alive and Norma Jean. Their debut full-length album, Dream Life, was released in July.