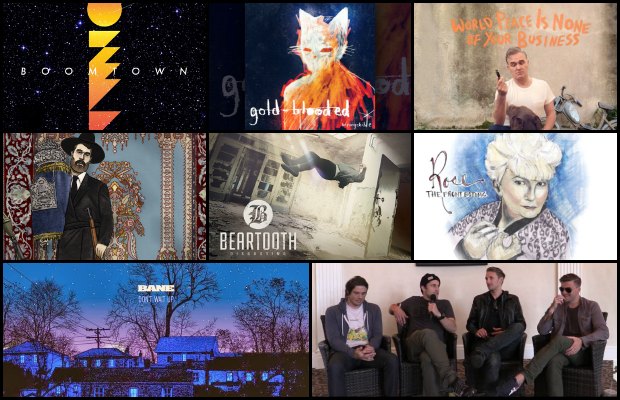 Sometimes the rock world can get noisy, and we don’t just mean in decibels or fuzz. Often the signal-to-noise ratio is more noise than signal. But no worries; we read, listen to and watch everything so we can sort it for you. Here are some of our favorite new songs and videos of May 2014.

If there is one song that Massachusetts hardcore icons Bane have released that encapsulates both their legacy and ethos as a cohesive unit, it’s “Calling Hours.” Taken from their farewell album, Don’t Wait Up (which we premiered), the track features not only the traditional, bone-crushing hardcore elements the band are notorious for, but hints of soaring melodic and heartfelt emo influences, as well. Boasting a slew of guest appearances from Have Heart’s Pat Flynn, Code Orange Kids’ Reba Meyers, Down To Nothing’s David Wood and Rotting Out’s Walter Delgado, “Calling Hours” is an idiosyncratic representation of who Bane are as a band. It transcends the ever-so-common genre barriers of hardcore, and invites listeners into a brand new world. —Tyler Sharp

Beartooth vocalist Caleb Shomo doesn’t know the meaning of “sugarcoating”—whether he’s sharing his struggles with addiction or, in the case of “Beaten In Lips,” taking an empowering approach to the topic of domestic abuse. Where other bands might decorate such a topic in metaphor and generalities, Beartooth leave nothing up for interpretation (“This is for the kids with the beaten in lips/Whose parents try to shut them up using their fists”). This is a battle cry, a confrontational anthem, and it’s beyond refreshing to see something spelled out so powerfully. “Listen to the sound of your children revolting,” indeed. —Cassie Whitt

After a lengthy hiatus occupied by a brief new band (Year Of The Rabbit), solo endeavor and work behind the scenes in the studio (the last Paramore and A Day To Remember records, to name a few), Ken Andrews has returned home to Failure. Their first song in 17 years, “Come Crashing,” is a conservative cut, but a promising return nevertheless. Not unlike “The Nurse Who Loved Me” from 1996's Fantastic Planet, this space ballad also gains momentum, with Andrews summoning his trademark scruff, as the band seem to be just getting warmed up for their second coming in the second half. — Brian Kraus

Originally released last year on Count Your Lucky Stars Records, Foxing's debut album, The Albatross, got a fresh coat of paint courtesy of Triple Crown Records, which reissued the album in a remastered form earlier this week. “Rory” is the centerpiece of this fantastic album, a beautiful example of the surprising similarities that post-rock and screamo have in common: unique instrumentation, intense push-and-pull crescendos and the feeling that the music's message is so important, its players would die to guarantee you heard it. — Scott Heisel

This song and the rest of the tracks on the Rose EP, which comes out June 17, are “previously unreleased fan favorites,” or if you're uncool like me and didn't get on the Front Bottoms train until last year, these are just all new songs to you. “Jim Bogart” is a laid-back acoustic song that sees frontman Brian Sella playing a game of sing-along back and forth with Natalie Newbold of New Jersey band Dollys, whose voice pairs surprisingly well with Sella's Tom DeLonge-esque vocals. And when the full band come in at the 2:27 mark as Sella proclaims, “And today we could do something that we've never done before”? If that doesn't give you the urge to get up and do something, anything, well then, you can't be helped. — Brittany Moseley

MORRISSEY – “World Peace Is None Of Your Business” & “Istanbul”

Leading up to the July 15 release of his 10th album, World Peace Is None Of Your Business, Morrissey debuted not one, but two new singles in the month of May: the forthcoming full-length's anthemic title track, and the unexpectedly thick and hypnotic “Istanbul.” The former is everything you'd expect from a Morrissey song circa 2014; socially conscious, sweeping, orchestral and melancholy. “World Peace” alone would serve as more than adequate, but it's “Istanbul” that truly has me counting down the days until Moz's return. Almost Smiths-esque in its guitar work, dripping with groovy percussion, and more personal than political in its lyrical ambition, “Istanbul” might just be the Pope Of Mope's best song in 10 years. — Philip Obenschain

Having existed in a semi-comatose state for the better part of the last seven years, Southern California rockers Ozma returned in earnest earlier this year with Boomtown, their fifth full-length, created due to a successful PledgeMusic campaign. But I gotta say: Not counting the instrumental album opener “Around The World In 80 Seconds,” it's a bit of a risk to have the first song on your first album in seven years not be written or sung by vocalist/bassist Daniel Brummel or vocalist/guitarist Ryan Slegr. The track in question, “Nervous,” was written by drummer Kenn Shane and sung by keyboardist Star Wick, which seems like an odd choice on paper but once you hear it, it's clear this is still the same Ozma: Yep, they're still heavily influenced by ’90s-era Weezer, but Wick's dream-like vocals drift atop multiple layers of keyboard tracks that gel surprisingly well with the propulsive, uptempo rhythm. It almost makes you wish she would've sung more on Boomtown. — Scott Heisel

What in the hell is this monster? Saosin first dropped this bomb of a new track on us at their reunion show in Philadelphia. The song just sort of thumps into existence, as Anthony Green soothingly creeps in like the ghost of music past and a flickering riff reminds us just how much we missed Saosin’s guitar magic. I might be breaking the rules here for the first time by including a live debut, but it’s well worth it. Everything breaks down in a cascade of blue and red toward the end, as guitarist Justin Shekoski engages in what can only be described as fretboard molestation and Green shrieks his heart out for the best vocal performance I’ve ever heard him give—with or without Saosin. Come on, guys, give us a recorded version. — Matt Crane

There's a whole lot going on in the first single from Say Anything's upcoming album, Hebrews. First, you've got the orchestral opening that manages to make strings sound both powerful and delicate. Then you've got not one, not two but three guest vocalists: Manchester Orchestra's Andy Hull, Balance And Composure's Jon Simmons and Bemis' wife (Eisley vocalist/guitarist) Sherri Dupree-Bemis. And finally, you've got the song itself, four minutes and 40 seconds of Bemis struggling with religion (“I believe in God, but I have no reason to follow”), self-loathing (“I'm just a strung out, overweight Jewish guy”) and a messiah complex (“I want to dethrone God/So I can be crucified”). Yet somehow, it all manages to come together beautifully in Say Anything's atypical, neurotic fashion. — Brittany Moseley

YouTuber Jarrod Alonge is good at making us laugh, and so is his fictional band Sunrise Skater Kids. In “Pop Punk Pizza Party,” the band parody the clichés of pop-punk, coming across as the twisted lovechild of New Found Glory and Good Charlotte that eventually grew up to be a Wonder Years fan. The lyrics are priceless, too: “I’ll have my best friend in the front seat/And my pizza in the back/Seven pairs of khaki shorts and stickers for my Mac.” Use the song as a test: If it gets stuck in your head and you find yourself thinking, “This is actually pretty good,” then you’re a true slave to the genre (like me). — Matt Crane

It’s been less than two months since acoustic duo This Wild Life announced their signing to Epitaph Records, and their debut full-length Clouded is now here. “405” is the perfect track to blast in the car on the freeway with the windows down as summer quickly approaches. This might be because the song is, in part, about the freeway I seem to live most of my life on (the 405, dubbed the “most congested freeway in California” based on data from the by the California Department of Transportation) or maybe because it’s just a damn good song. I’ll go with a mix between the two. — Nick Major

WRONGCHILDE – “Falling In Love Will Kill You”

Originally intended to be a coed duet, “Falling In Love Will Kill You” was flipped upside down when former My Chemical Romance vocalist Gerard Way entered the studio with Wrongchilde (Mat Devine of Kill Hannah) for the recording of his upcoming album Gold Blooded. “It was Gerard who had the vision to take a chance on it as two guys,” Devine told us when we premiered the song. The result is a breezy folk song combining two contrasting male voices dreamily warning of the perils of falling in love that is not only sweet, but also boundary-challenging. —Cassie Whitt