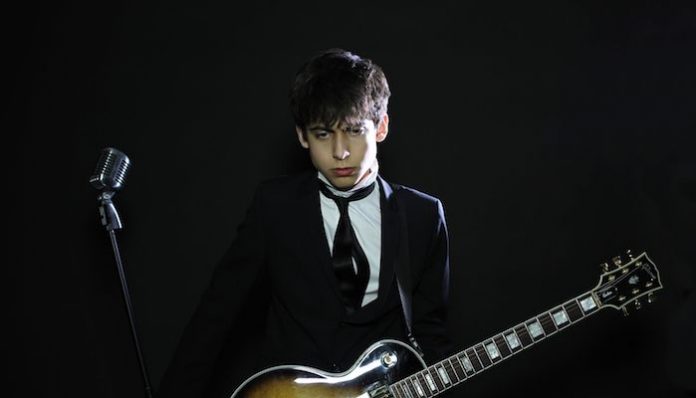 Aidan Gallagher isn’t slowing down anytime soon, gearing up to release his third single, “TIME.” The actor/musician is teaming up with AP to share the track and a partially My Chemical Romance-inspired video.

Gallagher, who many now know for his role in Gerard Way’s The Umbrella Academy adaptation, doesn’t shy away from either of those as influences.

“I wrote ‘TIME’ while I was filming season 1 of The Umbrella Academy in Toronto,” he says. “Because of the show, I spent a lot of thinking about the concept of time. The song really does speak to The Umbrella Academy plot but also about being young and looking into the future.”

Time itself also helped determine the overall aesthetic of the video through quick, blurred movements.

“Because time is linked with space, the video is shot in a black space with a single spotlight and me moving through that time and space,” he explains. “Because time is a sort of nothingness, yet it’s clearly existing when something is there cutting through it. Time could be the hidden fabric of the universe.

“We thought it would be cool to show me performing with lots of edits that contrasted with blur techniques to show movement through time,” he continues. “Time is fast and slow and blurry and clear all at the same time. And my moving through time and space is what shows you something is going on in that moment. So you see me in different ways, different filters, different angles constantly moving because time doesn’t sit still when something is moving through it.”

MCR’s influence continues through “TIME,” which Gallagher says he’s “constantly inspired” by. The vocalist expresses he aims to write music as influential as the band, and he even channeled I Brought You My Bullets, You Brought Me Your Love-era vibes for the video.

“Their music resonates, and by that, I mean it echoes in your mind after it reaches and articulates your feelings,” he explains. “I aspire to write music that does that. I think the video looks like it’s inspired by their ‘Vampires Will Never Hurt You’ and yet captures my own vibe too. I really just love wearing a suit. A good suit is super comfortable and fits my personality.”

Gallagher lets his personality shine through in the new video. This was important to him to capture in trying to differentiate himself from his actor background.

“Music videos are staged and edited, and musicians have a stage persona,” he says. “For me, writing, composing, singing and playing music might look like performance, but that’s really me, not a character, when you see me playing the piano.”

While Gallagher wants to make it clear this is 100% him and not an act, he also isn’t going to shoot down an opportunity to blend his two worlds.

Outside of dreaming up his own potential Danger Days-level production, Gallagher has big plans for the future. Working around a busy schedule, he’s writing as much as he can. After dropping a few singles, he intends to release a full album and announce a string of tour dates.

“TIME” hits streaming services May 10, and you can keep pre-save it here. In the meantime, you can check out the full video below.

Aidan Gallagher appears in 10 Topics for the latest issue (AP 370 with cover star Frank Iero), which is available for preorder now.