The marriage between visual art and rock music drove Andy Black to create ‘The Ghost Of Ohio,’ as well as his sophomore solo record of the same name.

The Last Rites gallery, theater and tattoo studio is one of the crown jewels of New York City’s gothic underground. On Oct. 4, Last Rites welcomed Comic Con to the city with art installations by Horacio Quiroz and Darby Lahger, as well as the premiere of the cover art for Andy Black (aka Biersack)’s upcoming graphic novel, The Ghost Of Ohio.

The Ghost Of Ohio, expected to be released by Z2 Comics in the spring of 2019, is Biersack’s first foray into the world of comics as a storyteller. Of course, any fan of his already knows that he has been comic book obsessed since childhood.

“For me,” he starts, “Batman was obviously the big character. But some of the characters that inspired me when I was a kid that kind of led me to rock ’n’ roll were Spawn and Lobo. As I got older, [I read] books like V For Vendetta. Rob Zombie, being someone who is a rockstar and who has been able to transcend that label, is someone who [has] definitely [been] a huge influence. He’s been very kind to me over the years.”

This marriage between visual art and rock music is what drove Biersack to create The Ghost Of Ohio, as well as his sophomore solo record of the same name. The two are meant to be released simultaneously and complement each other in terms of concept and theme.

The original story Biersack wrote for The Ghost Of Ohio is based on the overwhelming sense of paranoia that haunted him as a kid. 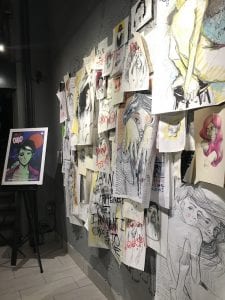 The reception was held at Last Rites Tattoo and Art Gallery in New York City. [Photo by: Taylor Markarian]

“I grew up in Southwestern Ohio,” he says. “As a kid, I was terrified of everything—all kinds of ghosts and scary things—to the point where I would have to talk to counselors and stuff about my fears. I couldn’t sleep, ever. I was constantly terrified that something was going to get me.”

Looking at him now, no one would suspect this black-clad, charismatic rockstar ever felt insecure, especially things dark and scary. Now, he is a lover of horror films and the gothic. But when he was younger, he wished he had someone to guide him through fears of death and the unknown. Unable to properly cope with this constant anxiety, Biersack turned to bad habits to solve his problems.

“As I got older,” he recalls, “that turned into me drinking all the time. I’ve been sober for two years [now], and I started to feel those things again that I felt as a kid. I was masking my fears with the drinking. I thought it would be interesting to look into what that is and what those emotions are.”

But analyzing and understanding his own emotions was only half of the research that went into making The Ghost Of Ohio and its characters.

“I started to look up these locations I grew up in,” he continues, “and how many crazy ghost stories there were. The park that I grew up playing in…there was a lake that I didn’t know people went to commit suicide all the time. The place that I spent all my summers was in a closed down tuberculosis hospital from the 1800s.” 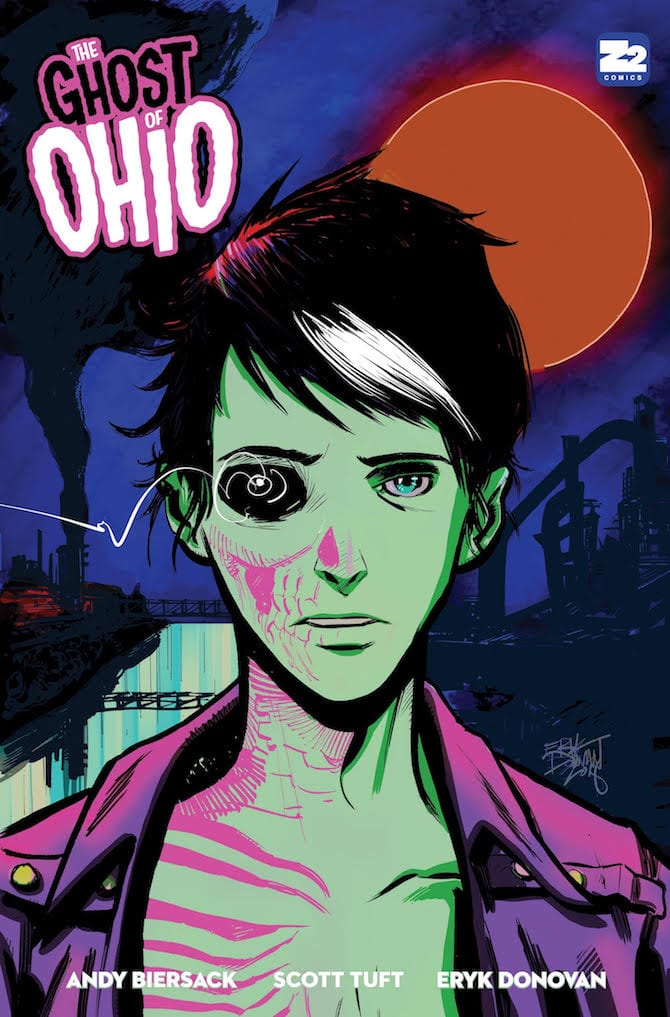 Could these ghastly scenes be emanating some serious spiritual energy? Was that, perhaps, the origin of Biersack’s childhood paranoia and anxiety? While he says he’s not certain that he’s ever experienced anything paranormal, it definitely piqued his interest.

“That got me thinking,” he reflects, “what if there was a manifestation of all of this? A comic-book character who goes through all those different eras and is kind of this Casper The Friendly Ghost to the kids who felt like [I did].”

Thus, The Ghost Of Ohio began to take shape. “The character runs the gamut historically, from women’s suffrage movements up until the civil rights movement in the 1960s,” he adds.

But translating an idea to visual art to music would take a lot of work. Biersack knew he had to call in some artistic reinforcements to get it all done.

“All my sketches have a very crude [look and] sharp lines,” he says of The Ghost Of Ohio’s visual style. “That [was] the basis for the character and what Eryk Donovan (Boom! Studios/Thrillbent Entertainment) has been able to capture in his style.” In addition to Donovan, Scott Tuft (Image Comics) was brought on to adapt Biersack’s original story to comic-book format.

The day following the reception at Last Rites, Biersack found himself on the same Comic Con panel as other musicians-turned-graphic novel artists Steve Aoki, Lights and Darryl “DMC” McDaniels.

As the Black Veil Brides frontman joins this new breed of multimedia artists, he is excited to see where this newfound creative freedom will take him. “I would love [for my] character to catch on enough for people to care,” he says. “For now, it’s a graphic novel—a contained series of stories—but who knows what the future [holds].”